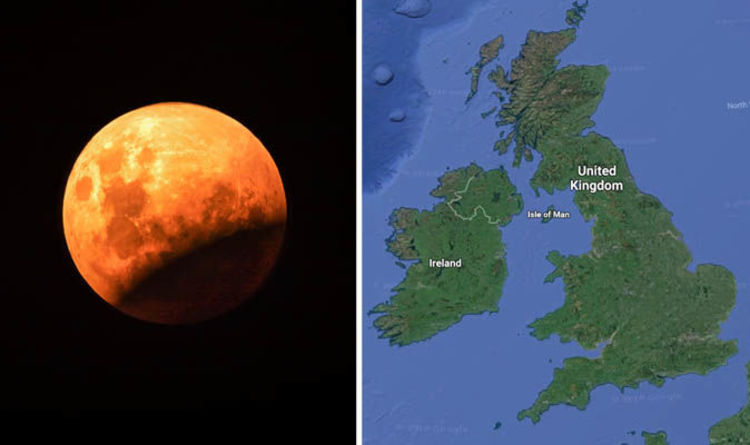 
The second Blood Moon of the year will grace the night skies with its presence this Friday, July 27, in the late afternoon hours.

Stargazers hoping to catch a glimpse of the moon as it glows a deep-red colour will be delighted to know the eclipse will be visible across the entire country.

The moment the eclipse begins will not be visible in the UK but the reddened moon will appear above the horizon shortly after.

The first stage of the eclipse known as the penumbral stage will happen around 6.14pm BST when the sun is still up in the sky.

Full eclipse will begin below the horizon at around 8.30pm and end at 10.13pm BST.

The total eclipse will clock in at one hour and 43 minutes, with additional partial and penumbral eclipsing, making it the longest lunar eclipse of the century.

What time is the Blood Moon lunar eclipse over the UK?

The lunar eclipse will peak out over the horizon at moonrise sometime after 8.30pm BST but the exact moment will differ between cities.

In Brighton, moonrise will not be directly visible until after 8.46pm BST, for example.

Maximum eclipse, when the moon is closest to the centre of the Earth’s shadow, will happen at 9.21pm BST.

In London, the eclipse will not be visible until after 8.50pm BST and maximum eclipse will occur at 9.21pm BST.

The more north you live, the later you will have to wait for moonrise.

Since the moon will hang low on the horizon during the eclipse, stargazers in Scotland should look for a good vantage point with an unobstructed view of the southeastern skies.

The lunar eclipse will come to an end across the country by 12.30am when the moon will return to its normal white glow.

What path will the Blood Moon lunar eclipse take?

The Blood Moon’s path of totality will see the moon pass over large swaths of Central Asia and Eastern Africa.

Outlying areas in Europe, South America, West Africa and Southeast Asia sit outside of the path of totality and will only see the eclipse with moonrise or moonset.

Unfortunately, this places the entire North American continent and Central America outside of the moon’s eclipse range.

The NASA eclipse map above shows the extent of the Blood Moon’s reach this Friday.

In the UK, the moon will appear low and close to the horizon in the southeast sky before it moves up fairly high in the southern skies by the end of the eclipse.

Long COVID Is Still Raising More Questions Than Answers, Say Researchers : ScienceAlert
‘Dark Data’ Is Leaving a Huge Carbon Footprint, And We Have to Do Something About It : ScienceAlert
3 Major Aquatic Animal Groups Can Trace Their Lineage to This Ancient Armored ‘Worm’ : ScienceAlert
Bitcoin’s Climate Impact Is Bigger Than Beef Farming – And It’s Only Getting Worse : ScienceAlert
Amazing New Fossils Provide Earliest Known Traces of The Evolution of Our Jaws And Limbs : ScienceAlert