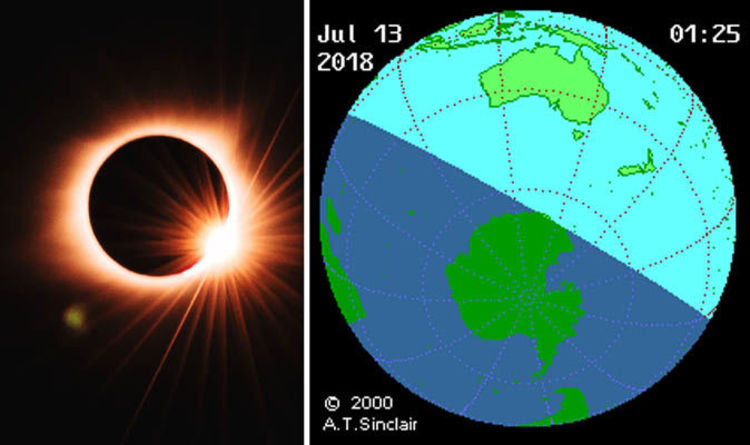 
The partial solar eclipse will take place early in the afternoon, Australian time, on July 13, when the moon passes in front of the sun.

But only a small portion of the moon will eclipse the sun tomorrow and only a handful of locations will actually see the eclipse.

The sun’s path of totality will extend to the southernmost parts of the Australian coastline, including the island of Tasmania.

NASA’s GSFC map shows the eclipse extending from its peak point over Antarctica to outlying parts of Western Victoria, South Australia and Tasmania.

The map further shows the eclipse might just brush against the coast of New Zealand as well.

But the outlook for Australia is pretty dire because the eclipse will be barely visible at all from these locations.

During the peak of the eclipse only about 10 percent of the sun will be be shrouded by the moon.

The animated NASA map below shows the eclipse’s path of totality over the Indian and Pacific Ocean tomorrow.

The eclipse coverage will further decrease further out from the peak as to low as two percent coverage in some locations.

The International Astronomical Union’s Working Group on Solar Eclipses revealed stargazers in Melbourne will only see about two percent of the eclipse.

Hobart, Tasmania, will be a bit luckier with 10 percent coverage after 1pm Hobart Time.

Eclipse coverage will be strongly limited in Adelaide and Stewart Island south of Invercargill in New Zealand.

The eclipse will not be visible over Antarctica at all despite seemingly passing over the frozen continent.

Antarctica is currently under the cover of darkness for six months, winter time, and will return to six months of continuous daylight in the Antarctic summer.

The next solar eclipse will appear in the skies on August 11, over parts of North Europe and Northeast Asia.

The August eclipse will be poorly visible over the more populated parts of Scandinavia, with coverage ranging from five to eight percent Norway to Finland.

Parts of the eclipse will be visible from St Petersburg in Russia, Shanghai in China and Seoul in South Korea.

The International Astronomical Union’s Working Group said: “The eclipse will extend as far south as Moscow, with only about two percent coverage of the sun, which will be high in the sky.

“In Yakutsk, Russia, just south of the Arctic Circle, coverage will be 57 percent.

Over the North Pole, eclipse coverage will extend to 65 percent – unfortunately the best view on the planet.

The Remains of This Recently Found Ancient Structure Are Even Older Than The Pyramids : ScienceAlert
How Many Ants Live on Earth? Scientists Came Up With an Answer : ScienceAlert
REM Sleep May Exist to Heat Your Brain Up From The Inside : ScienceAlert
A New FRB Signal Has Buzzed Nearly 2,000 Times in Just Two Months, Raising a Mystery : ScienceAlert
A Stunning New 3D Model of The Cat’s Eye Nebula May Help Us Solve Its Mysteries : ScienceAlert