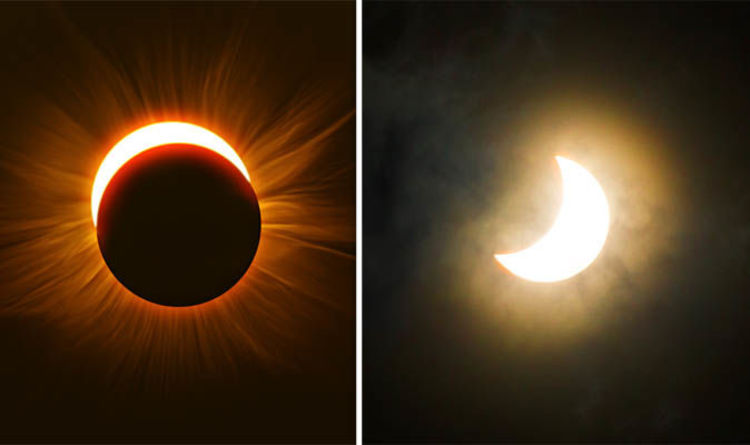 
Stargazers are in bad luck on Friday, July 13, because only a select number of places will witness the partial eclipse firsthand.

The eclipse will pass over portions of Antarctica and South Australia, including Tasmania, in the early hours of Friday.

Lucky stargazers in Hobart, Melbourne and Stewart Island may see parts of the eclipse for about one hour and four minutes.

But for most people in Australia, the moon will not appear to pass in between the Earth and the sun.

NASA’s Goddard Space Flight Center calculated the eclipse will peak, the so-called greatest eclipse, at 3.02am UT or 4.02am BST.

The event will be known as dark supermoon, which occurs when a shadowy new moon is exceptionally close to the Earth, according to National Geographic.

A normal supermoon, which is the opposite of a dark supermoon, occurs when a brightly lit full moon approaches the planet on its orbital path.

And according to The International Astronomical Union’s Working Group on Solar Eclipses, the moon will only cover about 10 percent of the sun tomorrow.

The astronomy group said only about two percent of the eclipse will be visible during the peak in Melbourne and conditions will be worse in Adelaide.

Around the South Pole in Antarctica, the eclipse will not be visible at all because the icy continent is currently shrouded in the darkness of night-time for six months.

But the good news is just four weeks later, on the morning of Saturday, August 11, another partial solar eclipse will pass over parts of Europe and Asia.

The International Astronomical Union’s Working Group said: “The Norwegian-controlled Archipelago of Svalbard, site of visibility of a total solar eclipse in 2015, will have a 45 percent partial eclipse.

Astronomers in the Swedish city of Kuruna and Tromso in Norway will see the eclipse at 25 and 29 percent coverage respectively.

Further east in Moscow, stargazers will only see about two percent of the sun disappear.

The North Pole looks to be the best place to catch the eclipse with about 65 percent coverage but Yakutsk in Russia comes in at a close second with 57 percent eclipse coverage.

A “narrow band of visibility” will also likely extend to the city of Seoul in South Korea and Shanghai where the eclipsed sun will be low on the horizon.

Neither the July 13 or August 11 eclipse will be visible from the UK, according to Royal Observatory Greenwich astronomer Affelia Wibisono.

The space expert told Express.co.uk astronomy enthusiasts will have to hold their breathes for a while longer until the next eclipse.

But on the night of Friday, July 27, a total lunar eclipse Blood Moon will grace the night skies – an event not seen from the UK since September 2015.