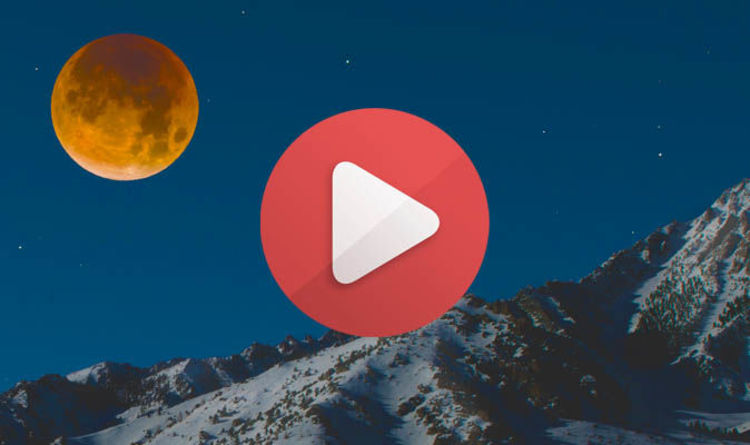 
The so-called Blood Moon will rise on the evening of Friday, July 27, just as the UK is experiencing its longest heatwave in 42 years.

With scorching temperatures and little respite from the heat, amateur astronomers would be forgiven for not stepping out on Friday to see the eclipse in person.

The good news is the Blood Moon total lunar eclipse will be broadcast live online on Friday giving you the option to stay cool and stay indoors.

Courtesy of robotic telescope service Slooh, you can watch the July full moon enter the Earth’s shadow in the embedded video player below.

The YouTube live stream will kick off at 6pm BST (5pm UTC, 1pm EDT, 10am PDT) from Slooh’s flagship observatory at the Institute of Astrophysics of the Canary Islands with feeds from around the world.

The eclipse live stream will also work perfectly for those who live in countries outside of the moon’s path of totality.

The Blood Moon will pass over swathes of Central Asia and Eastern Africa – the most optimal places to see the eclipse.

In Europe, Western Africa, Australia, parts of Southeast Asia and South America the eclipse will only be visible from moonrise or just around moonset.

This means hopeful stargazers in the US, Canada, Mexico and the whole of Central America will have to tune in here to watch the Slooh livestream.

Dr Godfrey said: “This is the first total lunar eclipse since the supermoon trilogy that concluded in January 2018 with a lunar eclipse.

“That phenomenon generated massive public interest, and that has hyped up the interest for subsequent events like this one.

“It’s exciting for astronomers to watch the public enjoy these kinds of celestial events.”

Slooh touted the eclipse a “must-see event” because it is the longest eclipse of its kind for at least another 82 years.

“Its duration will be the longest of this century with the total phase lasting an incredible 103 minutes.

“Our team of experts will be on hand live starting at 1 pm EDT to share the fascinating science, ancient lore, and human stories behind lunar eclipses – that most captivating of celestial events – as well as ‘Mini-Moons’.”

The total phase of the eclipse will clock in at one hour and 43 minutes and additional partial eclipsing will bring the whole event up to three hours and 55 minutes.

When the full moon passes through the Earth’s darkest shadow, or umbra, the moon takes on an ominous red glow rather than disappear completely.

The effect is known as Rayleigh Scattering and is caused by bent sunlight in the atmosphere filtering out certain colours of light on the visible spectrum.

Rayleigh Scattering is similarly responsible for redder skies during sunsets and the characteristic blue colour of the sky during the daytime.

You can visit Slooh to learn to explore space and watch more astronomy livestreams.

Bitcoin’s Climate Impact Is Bigger Than Beef Farming – And It’s Only Getting Worse : ScienceAlert
A Stunning New 3D Model of The Cat’s Eye Nebula May Help Us Solve Its Mysteries : ScienceAlert
Diamond From 660 Kilometers Below Earth’s Surface Reveals a Water-Rich Environment : ScienceAlert
Engineers Gave a Car a Pair of Eyes to Make Future Roads Safer For Pedestrians : ScienceAlert
Ancient Maya Cities Appear to Have Been Riddled With Mercury Pollution : ScienceAlert