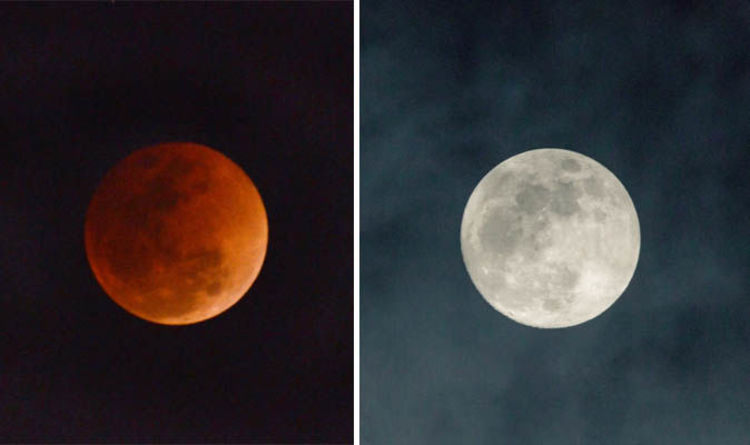 
The blood moon will be the UK’s first chance to see a major eclipse this year, with the longest lunar eclipse of a century visible tomorrow.

Those living around the Pacific Ocean had the chance to see a unique event earlier this year in January, as the super blue blood moon was visible from the US.

Blood moons are a type of eclipse, only visible in perfect conditions, so UK residents will be lucky to experience the latest one.

Alongside Mars peaking in visibility at the moment, this month is proving to be a special one for astronomical events.

Will the lunar eclipse be visible in India and Pakistan?

Both India and Pakistan will be treated to a super-long blood moon tomorrow on July 27.

All residents in India will be able to spot the moon as it makes its way over the night’s sky.

The lunar eclipse is predicted to last for a total of one hour and 43 minutes, long enough for everyone to come out and look.

Pakistan will also be treated to the stunning views, from the night of July 27 until the following morning.

Abdul Rashid, of the Pakistan Meteorological Department (PMD) told Pakistan’s Express Tribune that the eclipse would go through a number of phases.

“Meanwhile the greatest eclipse will be visible at 1.22am PST on July 28 which is going to be a historical moment.”

How is the blood moon caused?

A blood moon, otherwise known as a penumbral lunar eclipse, is a rare astronomical event.

The moon seems red as a result of a phenomenon named ‘rayleigh scattering’ which sees the sun’s rays refracted through the earth’s atmosphere, producing a red moon.

The blood moon will be visible to the UK from July 27, but exact times will be dependant on where you live in the country.

First glimpses of the moon will be in London, at 8.49pm, while the eclipse is at its least developed.

As you progress north, the times for viewing will become later, as Glasgow gets full view at 9.46pm.

The entire event will be visible for one hour and 43 minutes, just as it will be in India and Pakistan.

Long COVID Is Still Raising More Questions Than Answers, Say Researchers : ScienceAlert
We Just Got Our Closest View of Europa in 20 Years, And We Can’t Stop Staring : ScienceAlert
Control of a 6-Qubit Processor in Silicon : ScienceAlert
Ancient Burial of a Young Girl Shows How We Carried Our Babies 10,000 Years Ago : ScienceAlert
Bitcoin’s Climate Impact Is Bigger Than Beef Farming – And It’s Only Getting Worse : ScienceAlert