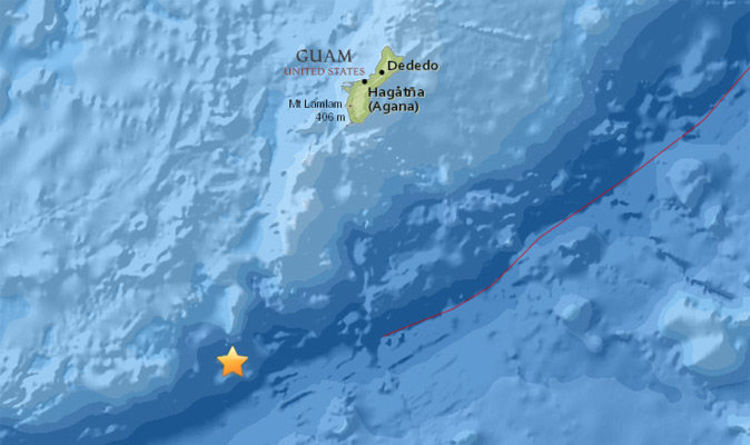 
A strong 5.1 magnitude quake hit off the coast of Guam, around 157 kilometres from the mainland.

The tremor struck at 12.21 GMT on January 3 at a depth of 32 kilometres beneath the surface of the West Pacific ocean.

As it stands, there has been no reports of injuries or damage to buildings, neither has a tsunami warning been issued.

The earthquake hit 157 kilometres from the small Merizo Village, where about 1,850 people reside.

Guam has been at the centre of many headlines over the last few months after North Korean dictator Kim Jong-Un threatened to launch missiles into the waters of the small island amid increasing tensions with US President Donald Trump.

Tensions were increased earlier this week when missiles fired over Japan were supposedly practice for a North Korean attack on Guam.

The country’s Korean Central News agency quoted Kim Jong-Un as saying: “The current ballistic rocket launching drill like a real war is the first step of the military operation of the KPA in the Pacific and a meaningful prelude to containing Guam.”

An article published by North Korea’s official Korean Central News Agency (KCNA) warned: “We have already warned several times that we will take counteractions for self-defence, including a salvo of missiles into waters near the U.S. territory of Guam, an advance base for invading the DPRK (Democratic People’s Republic of Korea).

“The U.S. military action hardens our determination that the U.S. should be tamed with fire and lets us take our hands closer to ‘trigger’ for taking the toughest countermeasure.”

As a result, Guam’s tourism industry has suffered, and it is projected that 2018 will see a massive decline in travellers to the US military island as a result of the threats.

‘Structured Water’ Is Not What People Claim. Don’t Believe The Hype, Scientist Says
Record-Breaking Experiment Could Solve a Huge Challenge in Quantum Computing
Extreme Drought in Italy Reveals Hidden Bomb Submerged in River Since WWII
An Experimental Surgical Robot Is Headed to The International Space Station
Water Can Spontaneously Form Hydrogen Peroxide, And We Finally Understand Why