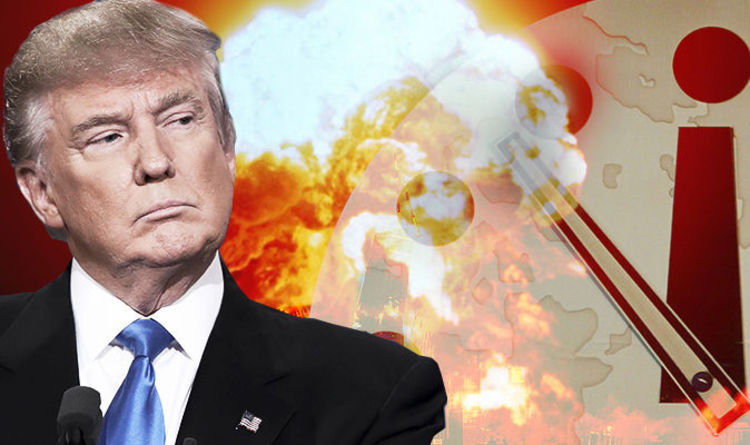 
The clock now stands at two minutes to midnight following a year of increasing nuclear war threats and as climate change worsened.

The metaphorical clock, created by the The Bulletin of the Atomic Scientists, assesses the danger of apocalypse based on the threats such as nuclear Armageddon, bioterrorism, climate change and other catastrophes.

It is now the closest it has been to midnight since 1953 when it was also two minutes to midnight when hydrogen bombs were being tested for the US and Soviet Union.

The move forward was largely prompted by issues created by US President Donald Trump.

In 2017, the controversial US President removed America from the Paris Climate Agreement in a move which is likely to exacerbate climate change.

Mr Trump and North Korea dictator Kim Jong Un also had a constant back and forth which took the world to the brink of nuclear war.

And he is on the brink of quitting the Iran nuclear deal, claiming Barack Obama’s deal was “the worst deal ever”.

Russia’s renewed interest in nuclear weapons was also another factor in moving the hands forward.

The scientists said “the world is not only more dangerous now than it was a year ago. It is as threatening as it has been since World War II.”

“The greatest risks last year arose in the nuclear realm. North Korea’s nuclear weapons program appeared to make remarkable progress in 2017, increasing risks for itself, other countries in the region, and the United States.

“Hyperbolic rhetoric and provocative actions on both sides have increased the possibility of nuclear war by accident or miscalculation.

“The nations of the world will have to significantly decrease their greenhouse gas emissions to keep climate risks manageable, and so far, the global response has fallen far short of meeting this challenge.”

The organisation wrote on their website: “The failure of world leaders to address the largest threats to humanity’s future is lamentable—but that failure can be reversed.

“It is two minutes to midnight, but the Doomsday Clock has ticked away from midnight in the past, and during the next year, the world can again move it further from apocalypse.”

Scientists unveiled the Doomsday Clock in 1947 after the atomic bombs they had helped to create decimated Hiroshima and Nagasaki at the end of the Second World War.

The clock’s hands are moved annually as scientists decide how close humanity is to destroying itself.

Co-founder Eugene Rabinowitch said when the Doomsday Clock was unveiled originally: “The Bulletin’s clock is not a gauge to register the ups and downs of the international power struggle; it is intended to reflect basic changes in the level of continuous danger in which mankind lives in the nuclear age.”