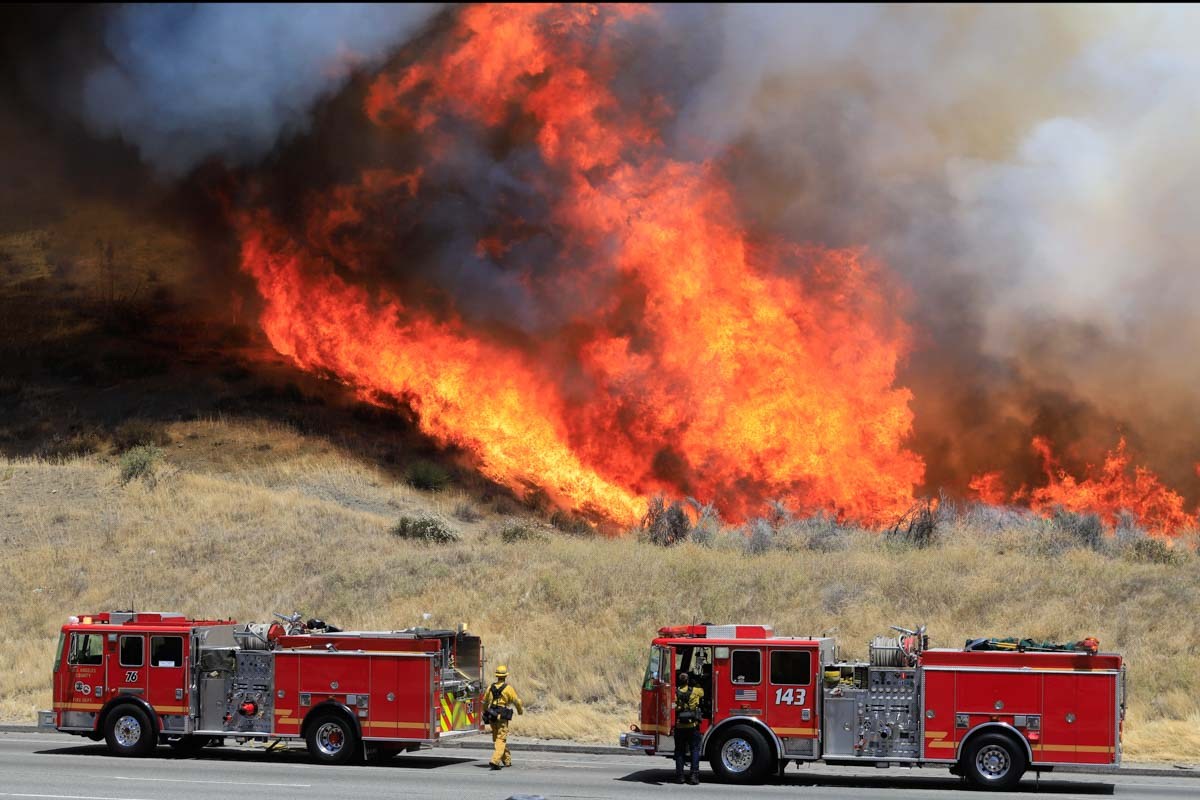 
After being devastated by wildfires last year, California has gone through several months of being relatively fire-free.

But as we head into the heat of late summer, the state is ready to burn. When the ignition happens, experts warn, it could cause wildfires more intense and destructive than anything California has experienced.

Here’s one version of what that could look like: Sometime in the coming days or weeks a storm originating from warm moist air in Mexico becomes drier and more lightning-prone as it heads north. Over California the skies suddenly begin crackling with electricity.

“We can have thousands of lightning strikes in just a couple of hours time, in many cases they’re in concentrated areas,” said Jessica Gardetto, a spokesperson with the National Interagency Fire Center.

That lightning could easily blast into some of the 147 million trees that have died in recent years because of the California drought and invasive pine beetles. What begins as a small fire could be quickly fanned into something ferocious by strong winds brought along with the storm. The resulting wildfire would roar through vegetation dried out by several weeks of hot summer temperatures until it’s so big that any community in its way can potentially be burned to the ground.

Last year saw a wave of horrific fires hit the state. Most notably, the Camp Fire killed 85 people — making it the deadliest fire in California history — and destroyed the town of Paradise. To the south, the Woolsey Fire devastated a stretch of coast that included the wealthy enclave of Malibu. The casualties and damage were such that some called it the worst fire season California had ever had.

This Year Could Be Just As Bad

“The potential is there to have similar fire activity as last year and the year before,” Gardetto said. “It just all depends on those weather factors lining up to create that unfortunate perfect storm.“

That perfect storm may seem pretty far away to many California residents. From January to early August in 2018, over 3,600 wildfires charred about 615,000 acres across the state, according to statistics from the fire protection agency Cal Fire. This year during the same period only 22,900 acres have burned — the 2,900 wildfires responsible for that damage have been smaller and less destructive.

One reason for that is an unusually wet winter with record-breaking amounts of rain and precipitation. The snowpack in California is 33 percent higher than last year. High humidity has additionally caused soil moisture to be 40 percent above average. Aside from a few short periods of extreme heat, California’s summer hasn’t been as scorching as previous years’.

“It’s been a good break for all of us because we’ve kind of been going nonstop for many years now,” Head explained. “It’s given us a chance to catch our breath.“

But Head and other experts know that the potential this year for another Camp Fire–style blaze — which destroyed around 18,800 structures and caused $16.5 billion in damage — is all too real.

Heavy precipitation earlier this year created a “super bloom” of vegetation that is now drying out in the August heat, creating tinder that could feed a massive fire. “We’re at a breaking point now,” Southern California Edison fire scientist Tom Rolinski told the Palm Springs Desert Sun in August.

CoreLogic fire specialist Tom Jeffery earlier this summer explained to the New York Times that “all of the factors that contributed to previous fires are still there…There’s no reason to think that we can’t replicate or — I hate to say this — we could potentially exceed what we saw in the past fires.“

So even with this year’s milder conditions, California is not out of the woods. And I am waiting ready for the first devastating fires.

Bacteria Can Use Plastic Waste as a Food Source, Which Isn’t as Good as It Sounds : ScienceAlert
Hypertension Drug Shown to Extend Lifespan And Slow Aging in Animals : ScienceAlert
Viagra Linked to Much Lower Risk of Death in Men, But Questions Remain : ScienceAlert
Major Blow as Experimental HIV Vaccine Fails in Late Clinical Trial : ScienceAlert
An Expert Explains Why The Radioactive Water Stored at Fukushima Should Be Released : ScienceAlert