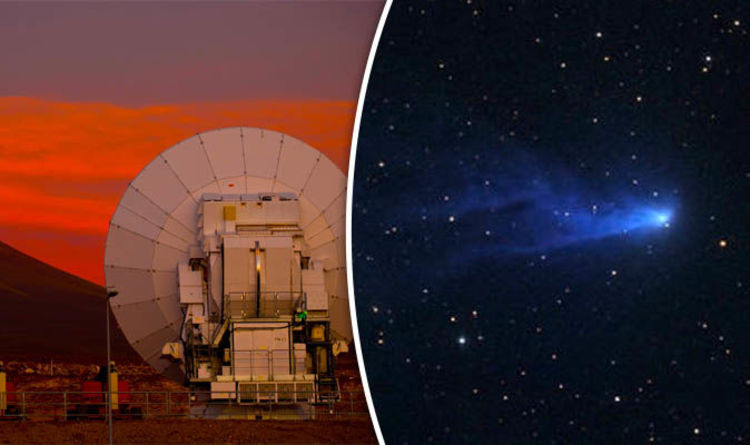 
Astronomers from the University of South Florida have taken a keen interest in the unique traveller focusing the Submillimeter Telescope at Mount Graham on it.

Astronomer Michael Mattiazzo said: ”The last notable comet with high CO was Comet Humason in 1962, so this is quite a rare sight.

“It will be very interesting to watch Comet R2 as it makes its closest approach to the sun in May 2018.”

The bright blue comet named C/2016 or R2 is caused by ionised carbon monoxide, which is highly combustible.

The Florida experts were able to observe the CO rich nature of the comet.

R2, which has an estimated orbital period of 20,800 years, will make its closest approach to the sun in May this year.

New photographs have revealed the stunning blue tail of an unusual comet made of exploding gas that is hurtling through our solar system.

Mr Jäger said: “I took 30 shots in 90 minutes, which allowed me to make a nice animation.”

The scientist believes the bizarre flight path of the comet is due to the explosive gas.

When released into the vacuum of space, his CO+ triggers the electric blue seen in astronomers’ pictures.

The news comes after NASA’s Hubble Space Telescope has captured a stunning picture of an “exotic” galaxy.

The Hubble’s Wide Field Camera 3 photographed the galaxy named UGC 6093, it has beautiful arms that swirl outwards from a bar slicing through the galaxy’s centre – which is known as a barred galaxy.

It is classified as an active galaxy which means it hosts an active galactic nucleus, which is a region at a galaxy’s centre within which matter is sucked into a super black hole.

As the black hole swallows up the material it emits intense radiation, which causes it to shine brightly.

On their website, NASA said: “UGC 6093 is more exotic still. The galaxy essentially acts as a giant astronomical laser that also spews out light at microwave, not visible, wavelengths — this type of object is dubbed a megamaser (maser being the term for a microwave laser).

“Megamasers such as UGC 6093 can be some 100million times brighter than masers found in galaxies like the Milky Way.”

Hubble’s WFC3 observes light spanning a range wavelengths, from near-infrared, through the visible range, and near-ultraviolet.

It has two channels that detect and process different light which allows astronomers to study a remarkable range of astrophysical phenomena.

Jupiter’s Ice Moon Europa Probably Has Upside Down, Underwater Snow : ScienceAlert
This Artificial Synapse Can Run a Million Times Faster Than Ones in The Human Brain : ScienceAlert
Clinical Trial Restored Sight to 20 People With Corneas Made From An Unlikely Source : ScienceAlert
A Snake-Lover Built Robotic Legs For a Snake, and It’s Insane : ScienceAlert
Many Cat Lovers Are Giving Their Cats Unwanted Affection, Study Suggests : ScienceAlert