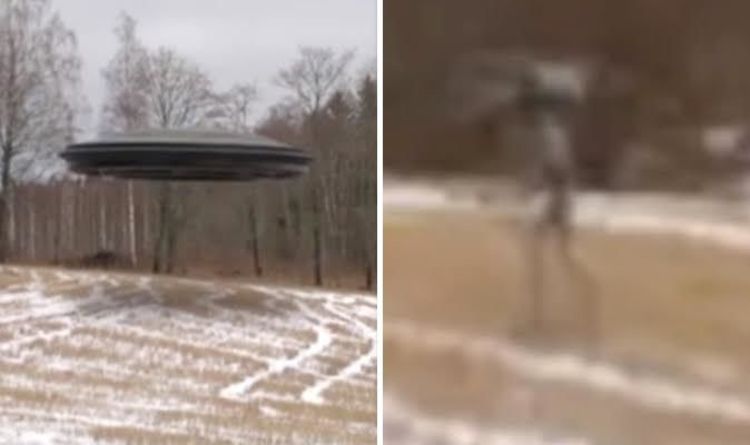 
An extraterrestrial appears to have been caught on camera in a remote snowy part of Romania near the city of Târgoviște, according to the YouTube clip.

In the clip, said to have been filmed earlier this month, a spindly, large-headed creature walks awkwardly on two legs towards a flying saucer that is perched impossibly upon a staircase at a 45 degree angle.

As the being gets on the staircase, it rises into the flying saucer.

Viewers then see the craft rise slowly up before moving off over a forest.

It has received millions of views on YouTube and social media websites.

On the Târgoviște+ Facebook it generated a staggering 15 million views.

A blurb with the video said: “It happened a few minutes ago near Târgoviște municipality.

“This is no joke, no fake, no hoax. People my hands are still shaking due to emotion.

“It’s registered with the phone and I still cannot believe I witnessed such a scene.”

Most viewers have insisted the clip is a crude CGI fake.

However, there have been some people left convinced they were looking at some history-making proof of aliens.

One posted on Facebook: “If this is real it changes everything.”

According to debunking website Snopes.com, there is no doubt it is a fake.

An article about the video said: “This video doesn’t actually show an extraterrestrial being.

“For one, internet users couldn’t quite agree on where this video supposedly took place.

“Most claimed that the video was shot in Târgoviște, but others shared this video as if showed an incident outside of Bacău, a Romanian city approximately 300 kilometres to the northeast, while others claimed that the footage showed an alien invasion in Alaska.

“This is a common trope of internet hoaxes. As the footage is not rooted in reality, the location can be changed to make it more appealing to audiences in various locales.”

The video first appeared on YouTube channel Alien Unleash, with no details about where or when it was apparently filmed.

Alien Unleash has promoted a series of other similar videos allegedly showing aliens, UFOs, and even dragons, from across the globe.

Snopes.com added: “Although this particular video was good enough to convince some viewers that it was real, it still contained a few errors which revealed it to be a hoax.

“When the UFO makes its way over the trees, for instance, it appears that the spacecraft is flying through the trees and not over them.”

Scott Brando, who runs debunking website ufoofinterest.org, said: “Of course this is a fake.”