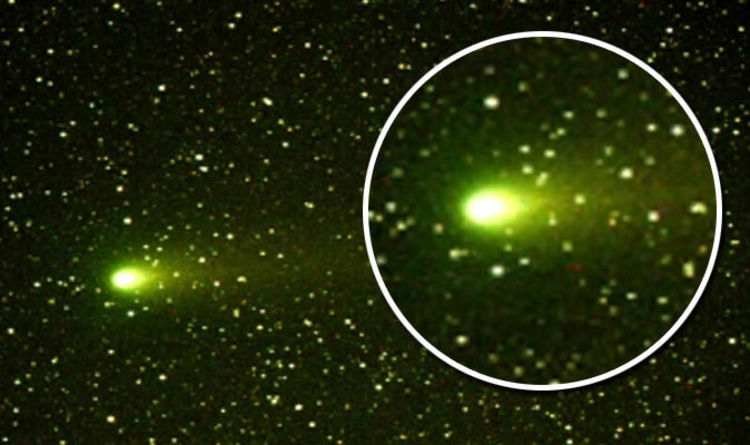 
Focus your telescopes on the night skies this September and you just might spot Comet 21P Giacobini–Zinner on its journey around the Sun.

The unusual green comet was spotted rushing through deep space on September 3 as the rock heads towards our home planet.

In just a few days, Comet 21P is expected to swing by the Sun and make its closest approach to Earth.

The spectacular flyby will take place on Monday, September 10, when the comet reaches its perihelion.

At its perihelion, or closest approach, Comet 21P will be approximately 36 million miles from Earth (57.9 million km).

This so-called close approach might seem like a lifetime away but it is probably for the best considering Comet 21P measures about 1.24 miles across (2km).

Any space rock this large could be an absolutely cataclysmic danger if it were to ever hit Earth.

During next week’s flyby, Comet 21P will swing by the Sun and shed parts of its outer coating.

The Sun’s intense heat and radiation will ionise the comet’s icy surface, leaving behind its characteristic green comet tail.

Paul Cox, an astronomer with robotic telescope service Slooh, said the comet already has never looked better and it is due to dazzle even more.

During a live streamed observation of Comet 21P, the space expert said: “What we’re seeing here, and this is an absolutely classic image of this particular comet, it looks fairly big, doesn’t it?

“And don’t forget all of those stars are in the background, the comet is in our solar system but it still looks pretty darn big.

“But actually the comet itself is only a couple of kilometres across and we’re not actually seeing the comet because the nucleus of the comet is hidden in all of the gas and dust which is subliming.

“It’s blowing off the comet’s nucleus and that gives us that bright head of the comet that is called the coma, the head, and then we’ve got this trail of dust and gas left behind it as well.”

The astronomer said the nucleus of the comet itself would appear smaller and fainter than the stars seen in the picture below if it were exposed.

Comet 21P was first discovered by Michael Giacobini in 1900.

The space rock was then rediscovered in 1913 be Ernst Zinner, and was named after the two astronomers.

Mr Cox said the P in the name stands for periodic and the 21 means it was the 21st periodic comet ever discovered.

The comet circles the Sun roughly every 6.5 years and is the parent body of the Draconids Meteor Shower, which we will see next month in October.

Unlike an asteroid, Comet 21P is a chunk frozen solid ice and dust packed tightly together. Asteroids are made up of more rocky material and metals.