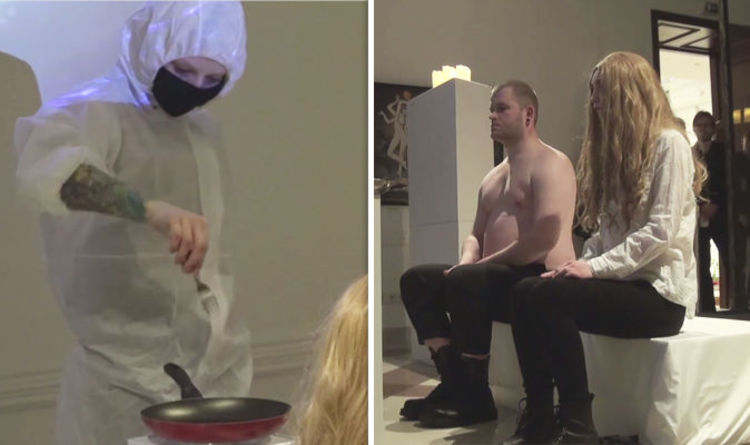 
Latvian artist Arthur Berzinsh streamed the act on Facebook live to thousands of viewers and received a number of complaints.

Some people reacted with fury on the artist’s Youtube channel.

One said: “What a load of fatuous b****cks. Performance art…really!”

Another said: “Makes no sense.”

But some people reacted positively to the piece with people praising the concept.

One Youtuber said: “Not much different than accepting the Sacrament of Catholic Communion, imho. Great piece.”

Another said: “One million reasons why Latvia is the best country in the world.”

In the footage, two people are sat down as a person in a white forensic suit cuts a chunk of meat out of their back using a scalpel, seemingly without the use of local anaesthetic.

The flesh is then thrown into a frying pan and cooked as the two people watch.

After that, the person in the forensic suit asks the pair to stand up, then picks up the flesh from the pan and feeds it to them.

Authorities in Latvia are now looking into the performance on March 6 at a museum in the country’s capital, Riga.

It is not known whether the flesh cut was actually from humans or whether it was staged.

The premise of the show was apparently to highlight the impact on humanity if sources run out.

It claims people would have to resort to cannibalism if they faced extinction.