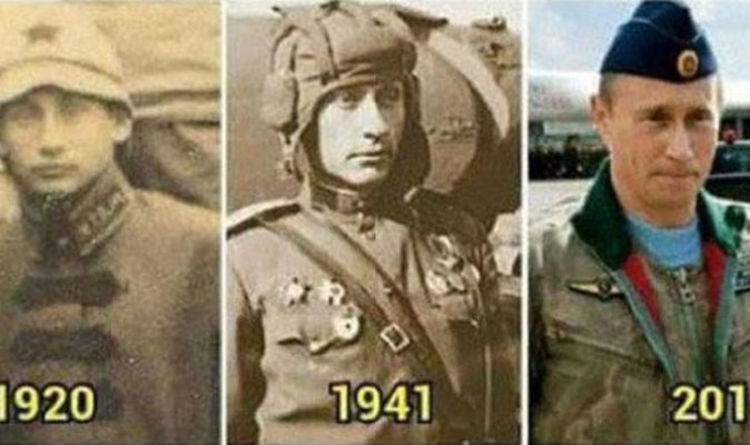 
It has led conspiracy theorists to dream up a version of events linking the images to the Russian president.

One picture, taken in 1920, is of a Russian solider who does look like the leader.

A separate snap said to be of a Russian solider and taken in 1941 also looks like Putin, along with individual from 1920.

On social networks photos are circulating from 1920. and in 1941, for which some people claim they are pictures Putin

Disclose.tv revealed the theory, reporting: “On social networks are circulating pictures from 1920 and in 1941, for which some people claim that they are pictures of Russian President Vladimir Putin.

“In fact, supporters of the thesis that Putin is almighty and immortal, have launched a story that their president is a mythical creature that resides on our planet for hundreds, if not thousands of years.

“The images were hundreds of times shared by conspiracy theorists, in an attempt to show that the travelers of time are among us, in all areas of our society.

“However, others believe that Putin could be immortal, a man who has been serving the Russian people for centuries.

“Even theories to explain these images go beyond, that connects the Russian leader popular with the Prince Vlad III of Transylvania, also known as Cond Dracula.”

Most scientists have rejected the possibility of time travel as we would need to achieve move faster than the speed of light to stand a chance.

However, there have been a glut internet videos recently featuring people claiming to be time travellers who have returned from the future.

Putin is not the first world famous person to have been found captured in historical images, sparking claims of time travel.

In 2011 an image said to have been taken in Bristol, Tennessee in 1870, of a dead ringer for Hollywood legend Nicholas Cage was put up for auction on eBay for one million dollars.

The auction immediately led to claims it was a photoshopped hoax, but the seller, Jack Mord of Seattle, Washington, maintains to this day he stumbled across the original print.

Mr Mord claims in the listing the image was photographic proof Cage is a real vampire who has lived for hundreds of years.

Around the same time a bizarre image of a man looking like John Travolta was also put up for sale by a separate seller who claimed to be unconnected to Mr Mord.

The two portraits were linked together by the fact Cage and Travolta starred together in Face/Off in 1997. This led to further claims they must have been edited pictures.

The unnamed seller from Ontario said he was inspired by Mr Mord to put his Travolta print up for sale.

He wrote: “I know you are saying John Travolta is alive today in 2011 and he doesn’t look 151 years old.

“John Travolta is a Scientologist, and many Scientologists believe in a type of reincarnation. Of course, time travel can’t be ruled out as well.”