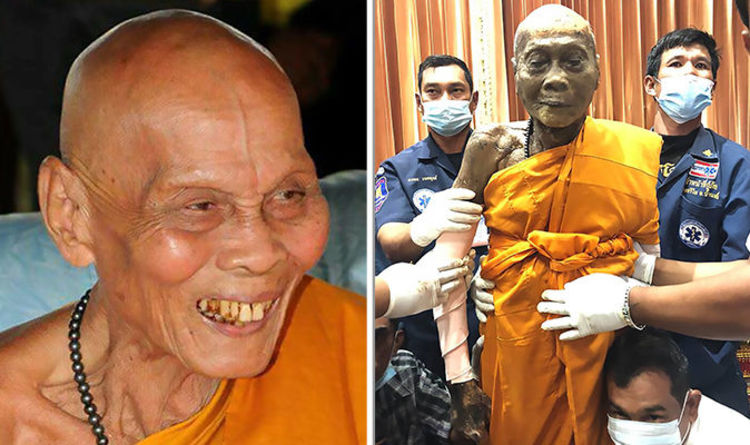 
Luang Phor Pian was a revered monk and spiritual leader but died of illness in a hospital in Bangkok, Thailand aged 92.

When he died he was taken to a temple for burial.

But this week his followers removed his body from his coffin as part of a traditional Buddhist ceremony.

They were shocked to find the monk had barely decayed and appeared to have a smile on his face.

Local media report that his body appeared in a state consistent with someone who had been dead for no more than 36 hours.

Pian’s peaceful state has been described as a sign the spiritual leader has truly reached Nirvana.

Spectators took photos as the monk was paraded through the crowd and the images were shared on social media.

Reports said the monks removed the body to fit it with new, clean robes.

His followers will continue to pray for him until a final resting ceremony is held on the 100th day of his death.

Luang Phor Pian is originally from Cambodia but spent a majority of his life serving as a guru in Lopburi, central Thailand.

The monk was married and had seven sons and two daughters.

At the age of 50, he ordained in Wat Khampaeng, Amphoe Ban Mi, Changwat Lopburi.

In Indonesia, there is a ritual called Ma’nene, or The Ceremony of Cleaning Corpses, in which families dig up their relatives and put them into new clothes.

Tradition says the spirit of a dead person must return to their village of origin.

This means if a person dies on a journey, the family would go to the place of death and walk them back tot he village.

This Artificial Synapse Can Run a Million Times Faster Than Ones in The Human Brain : ScienceAlert
A Common ‘Forever Chemical’ Has Just Been Linked to Liver Cancer in Humans : ScienceAlert
‘Structured Water’ Is Not What People Claim. Don’t Believe The Hype, Scientist Says
Deep-Sea Sponges Can ‘sneeze’ Out Mucus, and The Footage Is Weirdly Mesmerizing : ScienceAlert
The Moon Stole Something From Deep Inside Earth Eons Ago, and Scientists Can Prove It : ScienceAlert