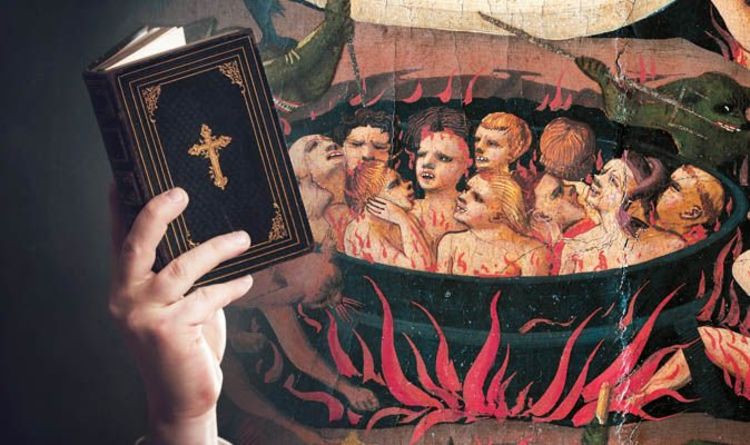 The Book of Revelation outlines the final showdown between God himself and his adversary Satan, in the final days of mankind. The scripture touches upon the outbreak of Armageddon, the Four Riders of the Apocalypse, the rise of the Antichrist and the seven-headed Beast whose number is 666. Because of its dire themes, cryptic messages and prophecies of doom, the Book of Revelation has both baffled and amazed devout Christians for centuries. Penned by the anonymous Prophet John, the scripture is named after the very first world of the book – apokalypsis, which is Greek for revelation or unveiling.

Historical and theological interpretations of John’s revelations often vary and contradict one another but many agree the book forewarns of the Second Coming of Jesus Christ.

With that in mind, what exactly does the Book of Revelation tell us will happen in the future?

Although the Book of Revelation addresses the Christian Church of the time when it was written, towards the end of the first century AD, some of its passages are timeless enough to be applied today.

According to the book, Satan will rise in power against the throne of God during a time of increased Christian persecution, death and misery.

The two powers will clash, laying waste to the Earth and the wicked alike – an event called by some the Great Tribulation.

READ MORE: Nostradamus predictions: Did he forewarn the world for 2019? Top chilling predictions

Revelation 2019: The Book of Revelations prophesies the end of the world and Second Coming of Christ (Image: GETTY)

Will the Great Tribulation happen in 2019?

There is nothing in the Book of Revelation to pinpoint an exact date of the final battle between the forces of good and evil.

The Tribulation is mentioned in Revelation 7:14, in reference to a period spoken of by Jesus in Matthew 24:21.

Revelation reads: “And I said unto him, Sir, thou knowest. And he said to me, These are they which came out of great tribulation, and have washed their robes, and made them white in the blood of the Lamb.”

And Matthew reads: “For then shall be great tribulation, such as was not since the beginning of the world to this time, no, nor ever shall be.”

A similar passage in Mark 13:19 reads: “For in those days there will be tribulation unmatched from the beginning of God’s creation until now, and never to be seen again.”

The robed and washed people mentioned by Jesus in the Revelation passage are most likely the souls of believers who were taken before the pearly gates during the Rapture.

Before the Great Tribulation ravages the Earth, some believers claim the souls of the righteous will be pulled into the heavens by Christ himself.

This so-called Rapture is mentioned in 1 Thessalonians 4.17, which reads: “Then we which are alive and remain shall be caught up together with them in the clouds, to meet the Lord in the air: and so shall we ever be with the Lord.”

Then a war broke out in heaven: Michael and his angels fought against the dragon

Unfortunately, the Bible does not exactly specify when the Rapture is bound to take place and some interpretations suggest it will happen after the Tribulation.

In the Book of Revelation 4:1, it is said: “After this I looked, and, behold, a door was opened in heaven: and the first voice which I heard was as it were of a trumpet talking with me; which said, ‘Come up hither, and I will shew thee things which must be hereafter.”

However, it remains to be seen when this will happen – one year from now or 1,000 years from now.

Revelation 2019: The Book of Revelation is the very last book of the Christian Bible (Image: GETTY)

Revelation 2019: The Book of Revelation speaks of a dragon fighting a woman in the heavens (Image: GETTY)

The Bible makes a clear point about the world coming to an end at some point in the future but does not specify a day or year this will happen.

The end of the world will be preceded by signs in the earth and the heavens and some believe these are already cropping up in the skies.

According to Daniel 11:35, the end of the world will come at an “appointed time”.

The passage reads: “Some of the wise will fall, so that they may be refined, purified, and made spotless until the time of the end, for it will still come at the appointed time.”

Another reference is found in Daniel 12:4-8, which reads: “But you, Daniel, shut up these words and seal the book until the time of the end. Many will roam to and fro, and knowledge will increase.

“Then I, Daniel, looked and saw two others standing there, one on this bank of the river and one on the opposite bank.

“One of them said to the man dressed in linen, who was above the waters of the river, ‘How long until the fulfillment of these wonders?’

“And the man dressed in linen, who was above the waters of the river, raised his right hand and his left hand toward heaven, and I heard him swear by Him who lives forever, saying, ’It will be for a time, times, and half a time. When the power of the holy people has been shattered, all these things will be completed.’”

Revelation 2019: A period of Great Tribulation will destroy the world (Image: GETTY)

The Book of Revelation also speaks of a raging war in the heavens, wrought by a seven-headed red dragon and a woman “clothed in Sun”.

There is no specific timeframe for when this battle will play out but it will end with the triumph of God.

“But the dragon was not strong enough, and no longer was any place found in heaven for him and his angels.

“And the great dragon was hurled down—the ancient serpent called the devil and Satan, the deceiver of the whole world. He was hurled to the earth, and his angels with him.”

Lyme Disease Is on The Rise, But There Might Be Hope in a New Vaccine : ScienceAlert
It Sounds Crazy, But Walking Backwards Is Really, Really Good For You : ScienceAlert
Mysterious Tendrils Inside The Brain May Control Our Perception of Time : ScienceAlert
We May Finally Know How Lightning Gets Its Zigzag Shape : ScienceAlert
Colossal Discovery on Mars Could Drive Surging Magma Under The Surface : ScienceAlert