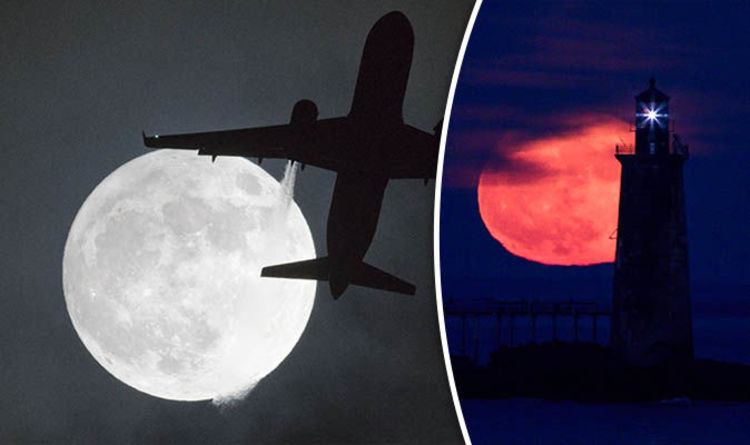 
The next supermoon will be on January 31, it follows on from the last supermoon on January 1 and marks the last in the supermoon trilogy – the first happened on December 3 2017.

A Blue Moon happens when two full moons occur in the same calendar month and so the January 31 supermoon will the second full moon of the month.

Blue Moons only happen every two and a half years on average and the next supermoon has been dubbed a super ‘blue Moon’ by NASA.

NASA has said the “extra special supermoon will reach its peak on the last night of January – Wednesday January 31 2018.

Stargazers will not only be treated to the super blue Moon but the supermoon will also coincide with a total lunar eclipse, which happens when the moon passes into the Earth’s shadow.

The moon will take on a eerie red glow as the supermoon happens to be the day of the lunar eclipse.

NASA has said: “The Moon will lose its brightness and take on an eerie, fainter-than-normal glow from the scant sunlight that makes it way through Earth’s atmosphere.

“Often cast in a reddish hue because of the way the atmosphere bends the light, totally eclipsed Moons are sometimes called ‘blood Moons.”

With the total eclipse, the celestial event will be called a ‘super blue blood’ Moon.

A Blue Moon is the term used when there are two full moons in a single calendar month.

However there is an older meaning which defines a Blue Moon as the third full moon in a season that has four full moons.

The Maine Farmer’s Almanac defined a Blue Moon as an extra moon that occurred in a season.

If a season has four full moons, then the third full moon may be called a Blue Moon.

Astronomers Charted The Sun’s Life, And This Is How The Story Ends : ScienceAlert
Plants Have Been Keeping a Secret From Us About How Thirsty They Actually Are : ScienceAlert
Hidden ‘Hunger Stones’ Reveal Drought Warnings From The Past : ScienceAlert
Why Do Kids Get Worms, And What Can You Do to Prevent It? : ScienceAlert
The Moon Stole Something From Deep Inside Earth Eons Ago, and Scientists Can Prove It : ScienceAlert