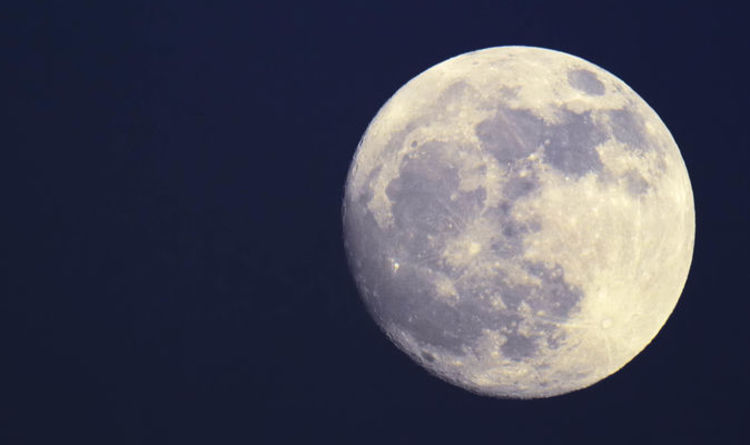 
The first full moon in March rose on Friday, March 2 – appearing its fullest at 12.51am GMT.

This moon is known as the Worm Moon, and was named by Native Americans as the rising moon marked the point in the year when the temperatures started to warm up and earthworms would start to appear.

The Worm Moon is also known as the Sap Moon, Crow Moon or Lenten Moon.

Now a second full moon will appear in the skies this month, with the second blue moon of 2018 to grace our skies on Saturday, March 31.

The moon will appear at its fullest at around 1.37pm GMT.

The Easter 2018 Blue Moon will be the last to grace the night skies until Halloween in 2020.

What is a blue moon?

Blue Moons are the second full moon to rise within one calendar month and supposed to be quite rare .

Because they only happen every 2.7 years, the lunar event helped to coin the saying “once in a blue moon”.

However an older meaning defines a Blue Moon as the third full moon in a season that has four full moons.

The Royal Observatory Greenwich said blue moons typically only happen once every two to three years.

Affelia Wibisono, an astronomer at the Royal Observatory in Greenwich, said: “March is expected to have two full moons which, by the modern definition, means there will be two Blue Moons this year.”

The next Blue Moon will not happen until October 31, 2020, which will be the second super moon in a calendar month.

The next seasonal Blue Moon will be on May 18, 2019 as it will be the third full moon of that season.

“Most Blue Moons look pale grey and white, indistinguishable from any other moon you’ve ever seen,” according to NASA. “Squeezing a second full moon into a calendar month doesn’t change the physical properties of the moon itself, so the colour remains the same.”

The March 31 super moon is known as a Sap Moon

This year, we have already seen the rare celestial phenomenon in January when a rare super blue blood moon loomed above the earth.

The incredible event consisted of a supermoon, blue moon, a blood moon and lunar eclipse.

And the Super Blue Blood Moon give stargazers a chance to see the moon appear larger than usual as it glowed a stunning crimson colour.

Study of 500,000 Medical Records Links Viruses to Alzheimer’s Again And Again : ScienceAlert
This Physicist Says Electrons Spin in Quantum Physics After All. Here’s Why : ScienceAlert
Scientists Create Shapeshifting Humanoid Robot That Can Liquefy And Reform : ScienceAlert
JWST Has Found Life’s Elemental Building Blocks in The Depths of Darkest Space : ScienceAlert
Dogs Can Be Aggressive For Lots of Reasons, And One of Them Is You : ScienceAlert