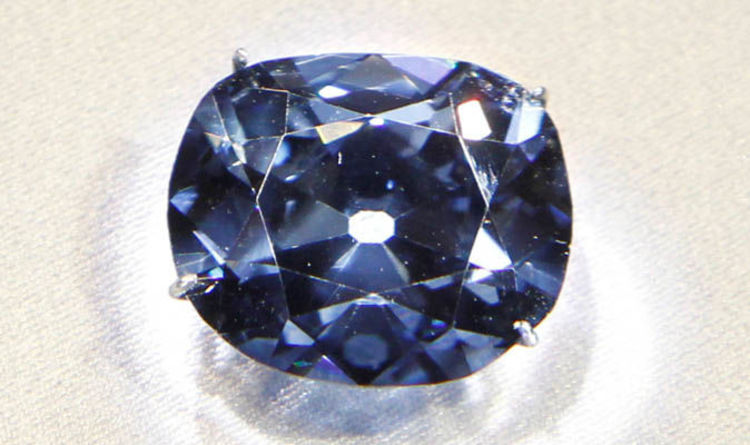 
Rare “blue” diamonds are famed for their vivid colour, produced by the element boron that is mostly found on the Earth’s surface.

But an unusual study of 46 blue diamonds conducted by US scientists suggests they crystallised under conditions of extreme pressure and temperature hundreds of miles down in the Earth’s lower mantle.

The research indicates that blue, or “type IIb”, diamonds are actually created four times deeper beneath the Earth’s surface than most other kinds of diamond.

They share their metallic liquid birth place with the world’s biggest and most valuable colourless diamonds, a discovery made by the same team in 2016.

Dr Steven Shirey, from the Carnegie Institution for Science in Washington D.C., said: “We now know that the finest gem-quality diamonds come from the farthest down in our planet.”

The most famous blue diamond is the Hope Diamond, housed at the US National Museum of Natural History.

Weighing 45.552 carats, the Hope Diamond is thought to have originated in India and has a history stretching back almost centuries.

It is rumoured to carry a curse, possibly invented to arouse interest in the stone and increase its value.

Blue diamonds weighing more than three carats fetch one million US dollars (£762,300) per carat or more at auction.

To carry out the study, the researchers looked for tiny “inclusions”, mineral crystals, trapped within the stones.

These are the remnants of minerals from the mantle rock in which the diamonds formed.

Lead scientist Dr Evan Smith, from the Gemalogical Institute of America, said: “These so-called type IIb diamonds are tremendously valuable, making them hard to get access to for scientific research purposes. And it is very rare to find one that contains inclusions.”

The analysis showed that blue diamonds were created at least as deep as the boundary between the upper and lower mantle, between 410 and 660 kilometres (254.7-410 miles) below the Earth’s surface.

Several stones contained evidence of an even deeper origin below 660 kilometres.

Most other diamonds form at between 150 and 200 kilometres.

How the blue-tinting boron became incorporated into the gems is still a mystery.

One theory is that it combined with water-rich minerals on the ocean floor and was carried far down into the Earth’s mantle by sliding tectonic plates.

The research is reported in the latest issue of the journal Nature.

Experiment Reveals What 1 Hour in Nature Does to The Human Brain : ScienceAlert
The Remains of This Recently Found Ancient Structure Are Even Older Than The Pyramids : ScienceAlert
We Have Our First Look at Neptune’s Rings in 33 Years, And They’re Glorious : ScienceAlert
Does IQ Decline as We Age? One Type of Intelligence Peaks in Your Twenties : ScienceAlert
JWST’s First Glimpse of Mars Reveals The Red Planet in a New Light : ScienceAlert