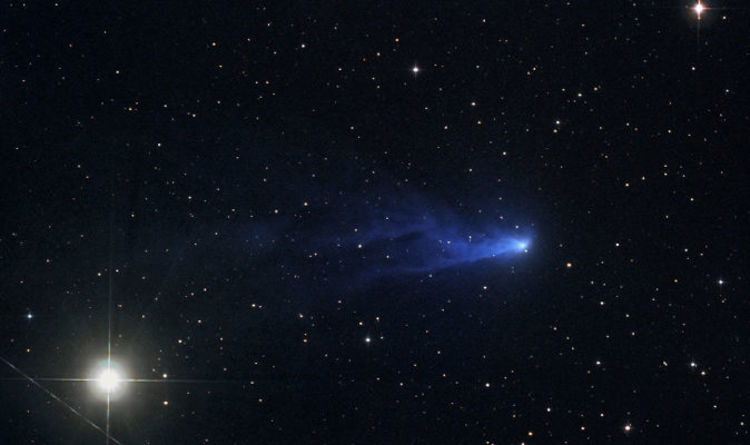 
Known as Comet PanSTARRS or C/2016 R2, the space body has been alerting experts who noticed it is leaving a bizarre blue trail in its wake.

Astronomy photographer Michael Jäger took images of the comet from his base in St Oswald, Austria, on January 6.

The comet seems to be on a strange and chaotic trajectory beyond the orbit of Mars, with a series of images merged into one showing it takes an almost rectangular, or “knee” as Mr Jäger puts it, turn.

He said: “I took 30 shots in 90 minutes, which allowed me to make a nice animation.”

The blue trail left behind by the comet is actually a result of an abundance of ionised carbon monoxide (CO+) which is stored inside.

As it the CO+ is released and hits the vacuum of space, it reacts to leave the fluorescent blue glow.

The comet is currently heading towards earth and will make its closest approach to the sun in May.

They wrote in the International Astronomical Union telegram: “This comet appears to be very CO-rich.”

This is also likely to be the reason that the comet is taking strange twists and turns.

CO+ can be extremely volatile and can change suddenly from a solid to a gas when it comes into the smallest bit of sunlight.

When it changes to gas quickly, the CO+ can act as a jet, pushing the comet on a different trajectory.

Comet observer Michael Mattiazzo of Australia said: “The last notable comet with high CO was Comet Humason in 1962, so this is quite a rare sight.

“It will be very interesting to watch Comet PanSTARRS as it makes its closest approach to the sun in May 2018.”

Last week, the Quadrantid meteors which are believed to come from the asteroid 2003 EH1, which is likely to be an extinct comet and NASA has described as a “dead comet.”

“It is possible that 2003 EH1 is a ‘dead comet’ or a new kind of object being discussed by astronomers called a ‘rock comet’.”

Why Do Kids Get Worms, And What Can You Do to Prevent It? : ScienceAlert
This Artificial Synapse Can Run a Million Times Faster Than Ones in The Human Brain : ScienceAlert
Jupiter’s Ice Moon Europa Probably Has Upside Down, Underwater Snow : ScienceAlert
These Asteroid Particles May Be Our Most ‘Pristine’ Sample of The Outer Solar System : ScienceAlert
Astronomers Charted The Sun’s Life, And This Is How The Story Ends : ScienceAlert