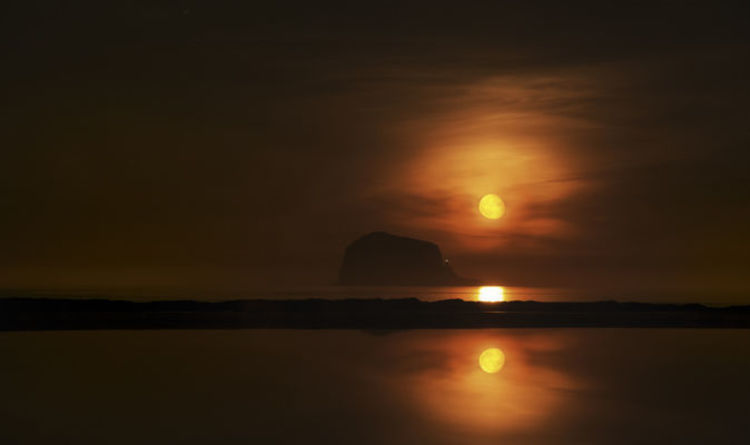 
On July 27, the Earth will be treated to a blood moon, and at the same time Mars will be visible in the night sky.

The two events have attracted a lot of interest from religious conspiracy theorists, claiming it could be a sign of the end of the world.

Christians often point to the Bible passage, The Book of Acts Chapter 2, which reads: “The sun shall be turned into darkness, and the moon into blood, before the great and notable day of the Lord come.”

However, one blogger believes it does not necessarily mean the apocalypse, but it could be a plethora of things.

The blogger, who gives his name as just Gary, was asked the question: “Do you think it is of note that Mars (Red Dragon, War Planet) aligns with this blood moon on July 27 as well?”.

Gary responded: “It could represent the coming war on Israel, the antichrist briefly outshining Christ in the world after the rapture, or perhaps Michael the archangel ‘standing up’ in preparation to battle the devil.”

However, scientists have given a more simple explanation for the blood moon.

The blood moon is technically an eclipse, and the moon takes on a red tinge when it passes through the shadow cast by Earth.

As for Mars – it is merely a coincidence that it is close at the same time because it is in “opposition”.

In astronomy, planetary opposition occurs when two heavenly bodies align on opposite sides of the celestial sphere, typically as seen from Earth.

Opposition is usually also marked by a planet being at its closest orbital point to Earth.

We Have Our First Look at Neptune’s Rings in 33 Years, And They’re Glorious : ScienceAlert
Why House Fly Barf Is an Overlooked Potential Vector of Disease : ScienceAlert
This Is How Much Fossil Fuel The World Is Sitting on, And It’s a Time Bomb : ScienceAlert
How Many Ants Live on Earth? Scientists Came Up With an Answer : ScienceAlert
The Real Reason For Using Flight Mode Is Not What You Think : ScienceAlert