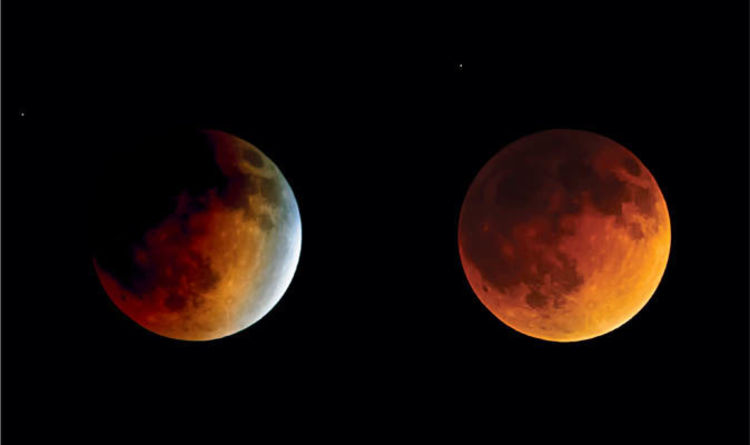 
The July 2018 Blood Moon and total lunar eclipse will outshine every other eclipse to take place between the years 2001 and 2100.

The eclipse will last one hour and 43 minutes – nearly 40 minutes longer than the January 31 Super Blue Blood Moon combo.

According to astronomer Bruce McClure of EarthSky.org, the eclipse will take peak sometime around 8.22pm UTC or 9.22pm UK time.

The space expert said: “The July 2018 full moon presents the longest total lunar eclipse of the 21st century on the night of July 27-28, 2018, lasting for a whopping one hour and 43 minutes.

During the eclipse, when the moon passes through the shadow cast by Earth, the moon will take on a deep red to orange colour rather than completely disappear from sight.

This bizarre effect known as Rayleigh scattering filters out bands of green and violet light in the atmosphere during an eclipse.

The partial lunar eclipse will begin at 6.24pm UTC and the full show will begin an hour later at 7.30pm UTC.

The total eclipse will come to an end by 9.13pm UTC and the moon will be visible in its whole glory again at 10.19pm UTC.

Why is the lunar eclipse so long?

In July 2018, the full moon and lunar apogee fall on the exact same date of July 27.

Mr McClure said: “Sometimes called an apogean full moon, or micro-moon or mini-moon, this smaller and slower-moving full moon takes more time to cross the Earth’s shadow than does a full moon that’s closer to Earth and moving faster in orbit.

“That’s why a full moon at or near lunar apogee adds to the duration of a total lunar eclipse.

“The longest possible total lunar eclipse is one hour and 47 minutes.”

The moon came very close to hitting that eclipse maximum on July 16, 2000, when the eclipse lasted one hour and 46.4 minutes.