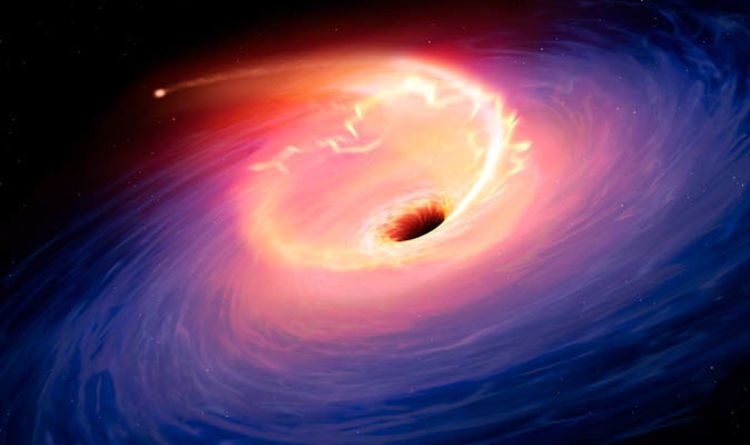 
A team of international astronomers have stumbled upon signatures of intermediate mass black holes (IMBHs) or middle-sized black holes weighting tens of thousands of solar masses.

In the past, scientists have long observed evidence of so-called baby-black holes weighing no more than tens of suns.

On the opposite side of the spectrum scientist found evidence of unimaginably giant black holes weighting millions and billions of stars.

But there was gap between the two, leading many to theorise the biggest black holes developed spontaneously rather than gradually over time.

Scientists led by Igor Chilingarian of the Smithsonian Astrophysical Observatory in Cambridge, Massachusetts, think they may have now found the missing link.

By studying an archive of galactic data collected across the universe the researchers found potential evidence for more than 300 galaxies formed around IMBHs.

At least 10 of these galaxies were confirmed to hold the middleweight black holes and the researchers are positive there could be more.

Dr Chilingarian now said the original list “must include at least a few dozen genuine” IMBHs.

The problem when searching for black holes in the depths of space is the monstrous wells of gravity are not visible since they do not emit light.

But scientists can instead look at the object surrounding a potential black hole hotspot.

Stellar objects feeling the irresistible tug of a black hole will begin to gain speed and heat up as a result of them being pulled towards it.

Hot objects emit intense x-ray radiation signals which can then be picked up by observers back on Earth.

However the x-ray signals emitted from IMBHs would be too weak to for scientists’ satellites to pick up.

Ezequiel Treister, Pontifical Catholic University of Chile in Santiago, said: “Black hole measurements are really hard; we’ve been trying to do this for many years.”

The scientists pinpointed specific blurry peaks in the galaxy’s spectrums where hydrogen clouds closest to the black holes swirl at breakneck speeds.

Gas clouds further out in the galaxies moved at slower speeds leaving sharper peaks for the scientists to observe.

The difference in peaks suggested the presence of middle sized black holes sending the galaxies into a spin.

The study’s findings, presented to The Astrophysical Journal, proposes a new model of how super-giant black holes form.

A Strange Thing Happens to Wolves Infected by Infamous Mind-Altering Parasite : ScienceAlert
Study Attempts to Unravel The Best Ratio of Land to Ocean For Exoplanet Habitability : ScienceAlert
Alzheimer’s Gene Doesn’t Guarantee Dementia. Here’s What You Can Do to Reduce Risk : ScienceAlert
Colossal Exoplanet Is One of The Most Massive Super-Earths Ever Discovered : ScienceAlert
Do You Need to Drink Eight Glasses of Water a Day? It’s Complicated : ScienceAlert