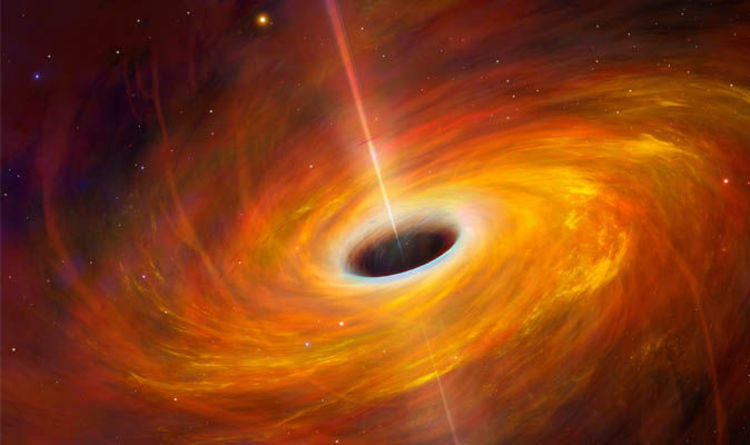 
The black hole, similar to the one in the centre of the Milky Way galaxy, was spotted in the elliptical dwarf galaxy 62 million light-years away.

The “supermassive” tear in space was observed through a collaborative effort by scientists from the US, Europe, Australia and Chile.

The black hole was discovered in the dead centre of the Fornax galaxy cluster – an unusual cluster of stars belonging to the ultracompact dwarf (UCD) classification.

Anton Afanasiev, lead author of the discovery, said: “We have discovered a supermassive black hole in the centre of Fornax UCD3.

“The black hole mass is 3.5 million that of the Sun, similar to the central black hole in our own Milky Way.”

A supermassive black hole, sometimes dubbed an SMBH or SBH, is the largest known type of black hole ranging from hundreds of thousands to billions of solar masses.

Almost all current known galaxies are focused around a supermassive black hole which in many cases gives them their characteristic spin.

In 2011 NASA’s Hubble Space Telescope managed to confirm the existence of such a black hole at the heart of galaxy M84 – an incredibly unprecedented achievement.

Black holes are incredibly dense points of compacted matter where the resulting forces of gravity are so powerful not even light can escape their pull.

But the problem with black holes is they are not directly observable to the naked eye or any telescope detecting x-rays, light or any other form of electromagnetic radiation.

NASA’s M84 discovery was made by using the Hubble Space Telescope’s powerful spectrograph imaging technology to map the rotation of gas around the black hole.

And the newly found Fornax black hole was spotted by members of the Faculty of Physics and Sternberg State Astronomical Institute, Moscow State University, in a similar way.

Towards this goal, the scientists used an infrared integral field spectrograph installed by the European Space Agency (ESA) in Chile to observe Fornax UCD3.

The astronomers used the technology to calculate the average difference in velocity between the stars in the system.

Burning stars orbiting a black hole accelerate in deferent directions but their average speed does not grow.

The scientists noted great velocity dispersion at the heart of the galaxy which could only be explained by the presence of a super-heavy object like a black hole.

The Fornax black hole is the fourth largest of its kind to be found in the centre of an ultracompact dwarf galaxy.

Dr Afanasiev said: “To be able to say with complete assurance that this hypothesis is correct, we need to discover more supermassive black holes in UCDs. This is one of the prospects of the work.

“Moreover, a similar methodology may be applied to more massive and less dense compact elliptical galaxies.

“In one of our next works, we will study the population of central black holes in objects of this kind.”

Watch a Tiny Robot Blob Transform Into Even Tinier Bits to Squeeze Through Cracks : ScienceAlert
The Orbit of a Sun-Like Star Reveals The Nearest Black Hole Ever Found : ScienceAlert
Termites Love Global Warming So Much That They May Make It Worse, Says Study : ScienceAlert
REM Sleep May Exist to Heat Your Brain Up From The Inside : ScienceAlert
A Stunning New 3D Model of The Cat’s Eye Nebula May Help Us Solve Its Mysteries : ScienceAlert