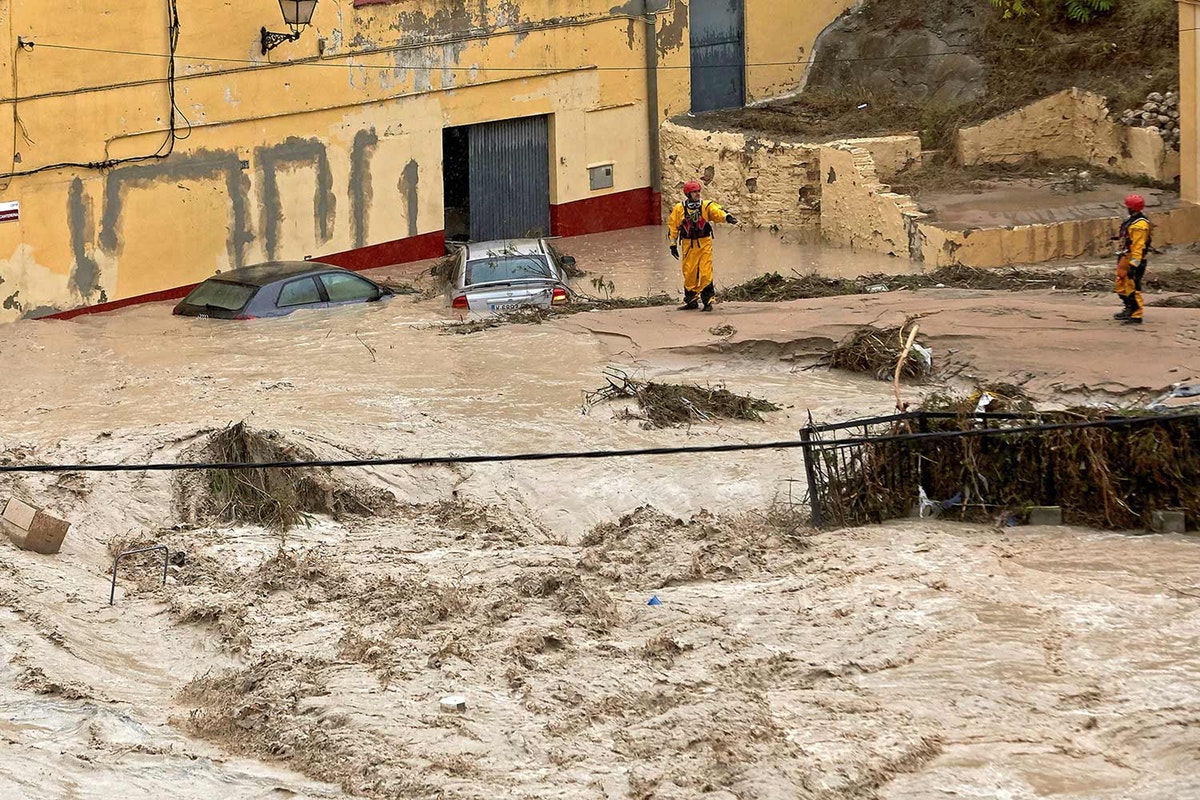 Ontinyent in the same province recorded a staggering 277.6 mm (10.93 inches) of rain, making September 12 its wettest day since records began in 1917.

The extreme weather has caused flooding in other parts of Valencia, as well as in Murcia and Castile-La Mancha.

The Clariano river in Ontinyent, a village in Valencia, has also burst its banks, requiring 40 people to be rescued and 150 evacuated from their homes.

Now look at that major flooding event just off the motorway A-7 in Orihuela, Alicante, east Spain:

A small tornado formed at around three in the morning on Dénia’s Raset beach, in Alicante province, damaging the municipal sports center and ripping up trees, traffic signs and roofs. Winds of 104 kilometers per hour were recorded.

The rising waters of the Clariano river have also destroyed a 16th-century bridge in Aielo de Malferit (Valencia). The centuries-old structure “is completely gone,” said the mayor, Juanra Espí.

But where is the train, please?

Spain has been hit by a bout of extreme weather this week, with the eastern region of Valencia in particular battered by torrential rain and flooding.

Yes, this is what it looks like when 277.6mm of rain falls on your city:

The unusual conditions are the result of a gota fría, or “cold drop,” a term used to describe a sudden fall in temperatures along the east coast caused by the arrival of very cold polar air.

A school wall in Ontinyent also collapsed on Thursday because of the extreme weather. The heavy rainfall caused the Cànyoles River to rise and the Bosquet ravine in Moixent also flooded, with several cars dragged away in the torrential flow of water.

Yes things are really going out of control, then:

The Cold Drop and Forecast For Spain

The cold drop hit the Mediterranean area on Monday and is forecast to last until midday on Friday. According to Spain’s meteorological agency AEMET, the extreme weather will intensify as it strengthens north of Algeria and in the southeast of the peninsula, leading to more torrential storms.

Almería, Alicante, Valencia and Murcia have been put on red alert until Friday for heavy rainfall and storms, with between 60 and 90 millimeters expected to fall in an hour, and more than 200 millimeters in total.

These storms will be among the worst in the last 13 years for their torrential intensity, persistence, the presence of very strong winds up to 100 kmh. There is also possibility of dramatic hail storms, 4-meter-high waves, waterspouts and tornadoes in the Levante.

The cold drop is expected to weaken over the weekend but it is likely to move inland, where heavy rainfall has also been forecast for the center and the south of the peninsula.

Ultra-Processed Food May Exacerbate Cognitive Decline, New Studies Show : ScienceAlert
Orcas Are Contaminated With a Forever Chemical Associated With an Unlikely Product : ScienceAlert
A Billion-Dollar Biotech Company Plans to Bring The Dodo Back to Life : ScienceAlert
Ancient Goo Spills The Secrets of How The Egyptians Mummified Their Dead : ScienceAlert
Incredible Footage Shows Planets Circling a Star Light-Years Away : ScienceAlert