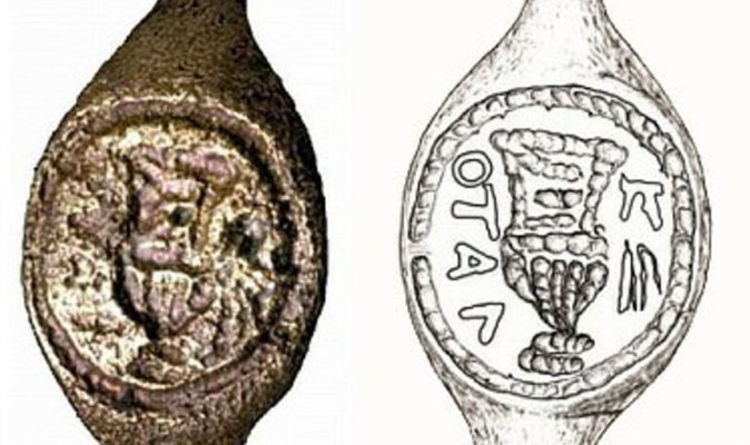 
Pontius Pilate’s name has been deciphered on a bronze ring found approximately 50 years ago during an archaeological dig at at the site of the Herodion fortress, built by Herod the King of Judea. The stamping ring was discovered by Professor Gideon Forster from the Hebrew University. Pilate was a Roman governor of Jerusalem in the years 26 to 36, who also allegedly ordered for Jesus’ crucifixion during a trial. After a deep clean, a special camera was used to photograph the ring at the Israel Antiquities Authority Labs, revealing Pilate’s name.

Professor Danny Schwartz told Haaretz: “I don’t know of any other Pilatus from the period and the ring shows he was a person of stature and wealth.”

A stamping ring represents status in the Roman Calvary, to which Pilate belonged.

Researchers believe it was used by Pilate in is work as Governor or to sign his name on documents.

The findings were handed over to the site’s current team, led by Dr Roee Porath, also from Hebrew University.

He said: “You can see he had a natural link to the Herodion. Even for Herod it was more than just a tomb site with a palace.

“It was also a significant site of government. You can see the unusual significance this site had.”

The Biblical crucifixion of Jesus commonly depicted the supposed Son of God viciously nailed to the cross after claiming to be the “King of the Jews” – a blasphemous claim to Judea perfect Pontius Pilate and the Romans who ruled over Jerusalem.

However, Meredith J C Warren, lecturer in biblical and religious studies at University of Sheffield, says there is a lack of evidence to support stories his hands and feet were nailed down, and suggests that he may have been tied up, as was more common at the time.

Professor Warren said: “Since the evidence from antiquity doesn’t provide a clear answer as to whether Jesus was nailed or tied to his cross, it’s tradition that dictates this common depiction.

“Those who have seen the film The Passion of the Christ will recall how much time the director, Mel Gibson, devoted just to the act of nailing Jesus onto the cross – almost five whole minutes.

“Given the relative silence on the act of crucifixion in the Gospels, this stands out as a graphic expansion.

“One of the only films that does not assume crucifixion involved nails is Monty Python’s Life of Brian, which shows multiple crucifixion victims, though not Jesus, tied to their crosses.”