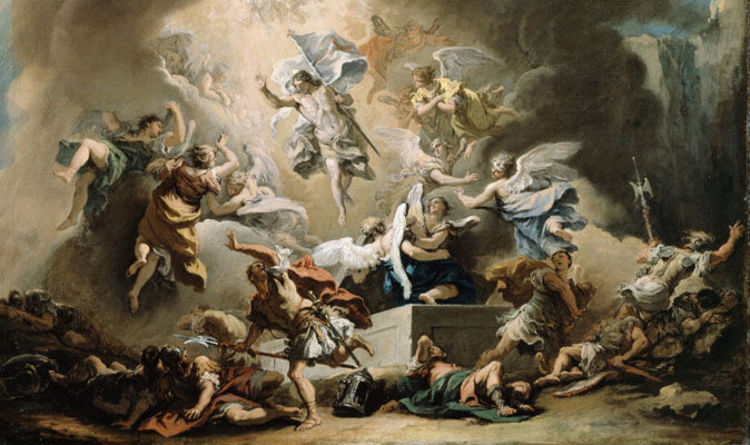 
Reincarnation is the philosophical or religious concept that an aspect of a living being commences a new life in a different physical body or another form after each biological death. This position of metempsychosis has propagated into religious beliefs, including Christianity. For example, in Hinduism, the cycle of rebirth is referred to as the wheel of karma. The Bible explains that the body and the soul are intertwined and cannot become separated. Whereas, believers in reincarnation claim the soul looks for a new body and a way to redeem itself after death.

A YouTube documentary – posted by Alltime Conspiracies in January 2018 – reveals shocking claims that reincarnation may have been removed from theholy text.

The narrator claims: “Reincarnation goes against the orthodox church doctrine.”

The YouTube clip refers to religious author Geddes MacGregor’s comment in his book, “Reincarnation in Christianity” published in 1978.

Mr MacGregor argues that “Christians did believe in reincarnation”.

However, he adds: “All written evidence of reincarnation in early Christian teachings and in the Bible was deliberately suppressed by the Catholic church.”

It must be noted that there is a lot of evidence that points towards a large percentage of early Christians who did accept the idea of a cycle and rebirth.

This was around the period of 0 AD to 500 AD and it was during this time period that the stories of Jesus Christ were written down by hand and passed down to future generations.

During this time, the Bible as we know it had not been written and put together in full.

As the story goes it was 367 AD that the Church Father, Athanasius, designated 66 books that together formed the Christian biblical canons.

These were, in essence, the only books included and recognised by Christian teachings.

Upon the discovery of these crucial and important documents, scholars have been able to confirm that Gnostic Christians also believed in reincarnation.

At this time they did not have the label of Gnostics at all, they were just Christians who followed the message of Christ and just so happened to believe in reincarnation.

Many people claim that a certain council took the teaching of reincarnation out of the Bible.

Although the majority cannot name the specific council, they most frequently refer to the Second Council of Constantinople (A.D. 553) and the Council of Nicaea (A.D. 325).

At that time there were already many manuscripts in existence spread throughout the Roman Empire.

New age believers say the church translated the Bible to expunge all evidence for reincarnation but it “did not do a complete job”.

Engineers Propose an Ambitious Plan to Bury Excess Carbon at The Bottom of The Ocean : ScienceAlert
Crocodiles Seem to Be Thriving in a Toxic River That’s More Like a Sewer. Here’s Why : ScienceAlert
These Mysterious Fungi Belong to an Entirely New Branch on The Tree of Life : ScienceAlert
Lyme Disease Is on The Rise, But There Might Be Hope in a New Vaccine : ScienceAlert
Astronomers Spot The Biggest Galaxy Ever, And The Scale Will Break Your Brain : ScienceAlert