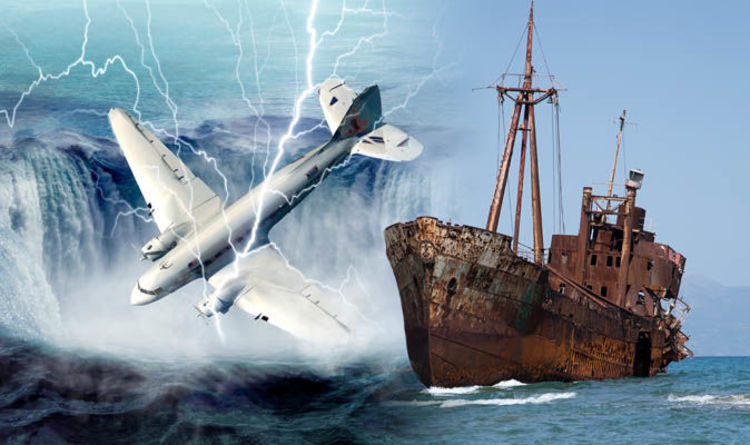 
The SS Cotopaxi mysteriously vanished into thin air on November 29, 1925, on a trip from South Carolina to Havana.

The steamer ship carrying a payload of coal and a crew of 30 members is believed to have hit a raging tropical storm.

But over the years, numerous theories about the ghost ship being swallowed and regurgitated by the Bermuda Triangle have surfaced online.

The latest shock claim follows a long line of online hoaxes and false claims the SS Cotopaxi was spotted sailing the North Atlantic Ocean after disappearing.

According to a report on the website The Online Newsfeed, the ghost ship was intercepted by the Cuban Coast Guard.

The SS Cotopaxi was supposedly first seen on May 16 by the coast guard before reappearing again in June.

The article reads: “Three patrol boats intercepted the ship to get some answers.

“When they reach the ship, they were shocked to confirm that the unmanned ship is the SS Cotopaxi that was lost in the Bermuda Triangle.

“As they dig for more answers, they saw a captain’s log book and said to be an authentic log book which contains all the information regarding the boat and crew that were there.

The article quoted a certain General Abelardo Colomé, saying the Cuban Government will examine the ship to uncover the unexplained mystery behind its disappearance.

However the validity of the article was questioned after it was revealed to be a carbon copy of the exact same story shared online by The Readers File! in September 2017.

Prior to that, the story was published on the history blog Learning History in 2016 and in September 2015 on Disclose TV.

In fact, the exact same story appears to have been first published by the World News Daily Report in May 2015 – a website which publicly admits to posting fake news, satire and semi or fully fictitious articles.

The legendary Bermuda Triangle, or Devil’s Triangle, is a region of water stretching from Florida to Puerto Rico and Bermuda.

A number of online hoaxes and conspiracy theories allege the area is home to an unusually high number of aeroplane crashes, ship wrecks and alien UFO abductions.

There is however no actual evidence to suggest the number of vehicles or people who go missing in this stretch of the Atlantic Ocean is any higher or lower than global averages.

According to Australian scientist Karl Kruszelnicki, the real Bermuda Triangle mystery is why there is mystery surrounding the Triangle in the first place.

He said: “According to Lloyd’s of London and the US Coastguard the number that go missing in the Bermuda Triangle is the same as anywhere in the world on a percentage basis.”

Instead the Triangle’s notorious reputation can be attributed to pop-culture dissemination and the fervour of conspiracy theorists.

These Mysterious Fungi Belong to an Entirely New Branch on The Tree of Life : ScienceAlert
It Sounds Crazy, But Walking Backwards Is Really, Really Good For You : ScienceAlert
Engineers Propose an Ambitious Plan to Bury Excess Carbon at The Bottom of The Ocean : ScienceAlert
Do You Need to Drink Eight Glasses of Water a Day? It’s Complicated : ScienceAlert
Mummies With Golden Tongues Discovered in Ancient Egyptian Necropolis : ScienceAlert