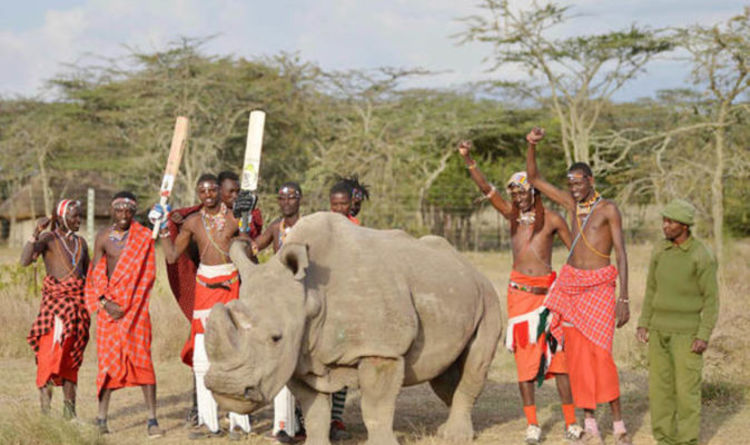 
The Northern White Rhino – one of the most endangered species on earth – is all but extinct, with just two female rhinos remaining in the world.

The species was wiped out thanks to the North African poaching crisis of the 1970’s and 80’s, where a demand for Rhino horn eventually wiped the entire male population.

However, the last male White Rhino, a 43-year-old male called Sudan, died in Kenya in March this year.

The near-extinction of the Northern White Rhino has been attributed to the African poaching crisis of the 1970s and 80s, where the increasing demand for rhino horn wiped out its population.

But immediately after the last male rhino’s death, scientists extracted and froze his sperm to use as part of “artificial reproductive techniques” such as IVF.

But Ms Strachan, who has presented The Really Wild Show!, Countryfile and Autumnwatch for the BBC, said the new initiative was misguided.

Continuing she said: “I read just a couple of days ago that they took some sperm from it before he died and they are now going to put it in a southern white rhino and they are hopefully going to create and clone something.

“Personally, I think that’s absolute madness. I think we should be using the huge amount of money that costs on saving what we can save now. Instead of bringing back stuff, because where are you going to put it?

“We are so overcrowded on this planet.”

Scientists plan to take eggs from the last surviving Northern White females and artificially inseminate them with the frozen sperm.

They will then implant the eggs into Southern White Rhino females to act as surrogate birth mothers.

The team hopes that the Rhino calves will be born within the next three years and bring the sub species from the brink of Extinction.

Professor Thomas Hildebrandt, head of the department of reproduction management at the Leibniz Institute for Zoo and Wildlife Research in Berlin, announced the initiative in early July.

The cost of the programme is estimated to cost around $9 million (£6.7 million).

Professor Hildebrandt told The Telegraph: “They have a very high chance to establish a pregnancy once implanted into a surrogate mother.

“We will start with implanting a hybrid embryo in the next few weeks and months to test the system. And after that the success we will plant a white rhino into a surrogate mother.

“We hope within three years we will have the first Northern White Rhino calf born.”

Biology Inspires a New Kind of Water-Based Circuit That Could Transform Computing : ScienceAlert
A Rare Condition Makes Hair Truly Untamable, All Thanks to These Genes : ScienceAlert
3 Major Aquatic Animal Groups Can Trace Their Lineage to This Ancient Armored ‘Worm’ : ScienceAlert
We May Finally Know Why Oceans in The Southern Hemisphere Are Getting So Warm : ScienceAlert
Ancient Burial of a Young Girl Shows How We Carried Our Babies 10,000 Years Ago : ScienceAlert