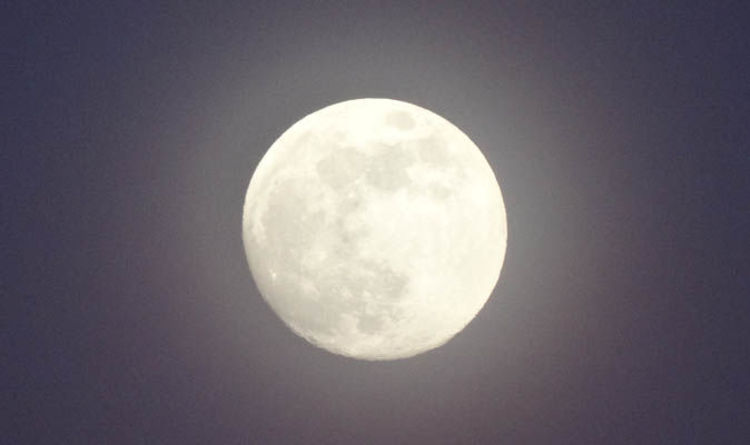 
The so-called Sturgeon Moon is the ninth Full Moon phase of this year’s lunar cycle and the final one to grace the night skies before Autumn.

If you look up at the sky tonight you will see 100 percent of the lunar orb’s face lit up by the Sun.

This happens because for one moment this month the Moon will sit directly opposite the Sun at 180 degrees.

Throughout the rest of the month the Moon will sit anywhere between 180 and zero degrees in relation to the Sun.

But the Moon will deceptively reach this phase in the daytime over the UK, reaching Full Moon around 12.56am (11.56am BST).

This means, weather permitting, you might be able to spot the Moon during the daytime.

If it is bright enough outside, the Moon should be able to breakthrough the blue sky.

The August Full Moon is sometimes known as the Sturgeon Full Moon thanks to the traditions and customs of Native American tribes in the Eastern US.

According to the Old Farmer’s Almanac, a guide to nature, weather and astronomy, native tribes kept track of the changing seasons and seasonal variance in the landscape and nature by keeping an eye on the different phases of the Moon.

Amy Nieskens, of the Old Farmer’s Almanac, explained: “August’s Full Moon is known as the Full Sturgeon Moon because Native American tribes knew that the sturgeon in the Great Lakes and in Lake Champlain were most readily caught during the Full Moon.

“And now a question for the Old Farmer: Why can you sometimes see the Moon during the day, especially in the summertime?

“Whenever we see the Moon what we are actually seeing is sunlight that is illuminating its surface.

“In the Summer, better weather conditions and more outdoor activity increase the probability of seeing the Moon in daytime.

“It looks more dim and faint because your eye’s comparing it with direct sunlight, not a nighttime sky.”

If the skies are clear tonight, you should be able to spot the planet Mars as well.

If you are watching from London tonight, you should see the Red Planet pop up at night just after sunset around 7.17pm BST.

Mars should remain visible throughout most of the night until it sets around 2.19am BST on Monday morning.

Dr Gerst tweeted a photo of the two glowing orbs from space, saying: “The road ahead. As our neighbours, these two are the undiscovered continents of our time.

“Moon and Mars are just around the corner. They keep important secrets for us and we can get there. Let’s go!”