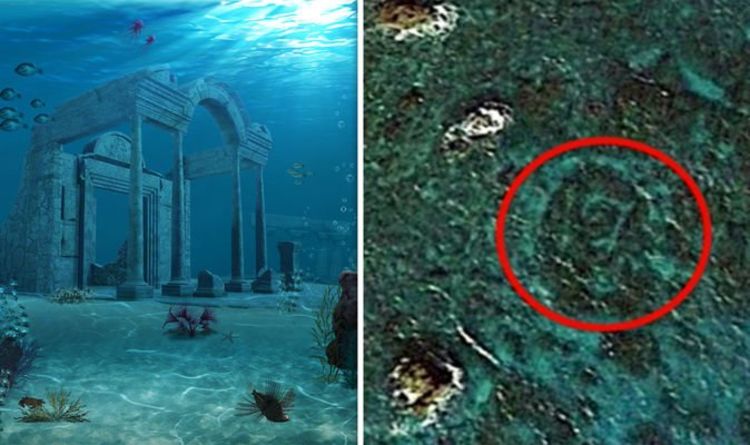 
Researchers have been on the hunt for Atlantis for more than two millennia since it was first written about by Plato in 350 BC. Now one conspiracy theorist believes they have found the mythical city near the coast of Japan. By analysing Google Earth, prominent conspiracy theorist Scott C Waring spotted some small strange structures in shallow waters off the coast of Japan’s Tsutstu Island.

The structure is in an ’S’ shape and is roughly six metres in length, as if it were a wall of some kind.

If it is not Atlantis, Mr Waring theorises it could have been built by ancient aliens.

Mr Waring wrote on his blog ET Database: “I was using Google Earth Maps when I found this symbol in the ocean. It is about 1-2 meters deep and close to 6 meters across.

“The symbol looks old, not thousands, but millions of years old. For it to be visible it must be carved very deep. I tried to match this up ancient Japanese but found nothing that was similar.

“It’s possible that millions of years ago, and an alien culture came down in this location to create a city. Its also possible that this city was Atlantis itself.

“It is obvious from the evidence world wide that aliens did inhabit the earths surface millions of years ago, but this may be one of the few locations were alien writing has been found.”

Atlantis was first written about by Geek philosopher Plato in 350 BC who detailed a mysterious island that seemingly just vanished.

Some believe that Santorini, one of the Cyclades islands in the Aegean Sea, is the lost city of Atlantis, where a huge volcanic eruption wiped out the Minoan culture – an ancient civilisation that flourished between 3650 to 1400 BC.

Prior to this, one of the more recent claims was that Atlantis had been discovered in the Eye of the Sahara.

Located near Ouadane, in central Mauritania, is the Richat Structure, also known as the Eye of the Sahara.

The circular feature is alleged to have been created by an asteroid impact although there is no credible evidence to support this.

Solon, a statesman from Ancient Greece, is the man who is thought to have passed on information regarding Atlantis to Plato.

Jupiter’s Ice Moon Europa Probably Has Upside Down, Underwater Snow : ScienceAlert
The Moon Stole Something From Deep Inside Earth Eons Ago, and Scientists Can Prove It : ScienceAlert
A Snake-Lover Built Robotic Legs For a Snake, and It’s Insane : ScienceAlert
This Artificial Synapse Can Run a Million Times Faster Than Ones in The Human Brain : ScienceAlert
Scientists Say ‘space Bubbles’ Could Shield Earth From The Sun, But Would It Work? : ScienceAlert