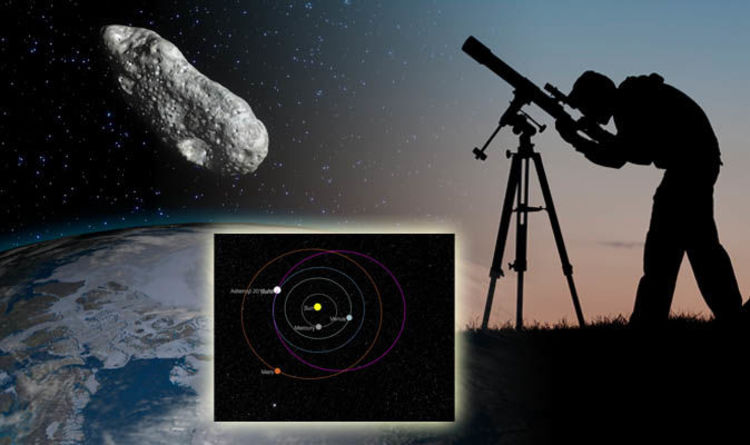 
First detected by NASA on January 5, Asteroid 2018 AJ is due to hurtle past Earth on Tuesday January 23.

The asteroid, which is a big as a seven-storey building, will avoid a direct hit with our planet by about 1.1 million miles – a stone’s throw in astronomical terms.

The exact orbit of Asteroid 2018 AJ could still change slightly, but scientists expect the rock to pass at 4.6 times the distance from Earth to the Moon.

NASA closely considers anything that comes within six million miles of our planet as a near earth asteroid (NEO), and has admitted that Asteroid 2018 AJ has been particularly difficult to forecast.

All new asteroids are given a condition code of between 0 to 9 on the Torino Impact Hazard Scale, based on how certain astronomers are about its course.

Zero means they are fairly certain, but 9 is classed as “highly uncertain”.

AJ 2018’s condition code currently sits at 7, meaning there is still a threat of “global catastrophe”.

Describing an asteroid than ranks 7 on the Torino scale, NASA said: “A very close encounter by a large object, which if occurring this century, poses an unprecedented but still uncertain threat of a global catastrophe.

“For such a threat in this century, international contingency planning is warranted, especially to determine urgently and conclusively whether or not a collision will occur.”

Asteroids are often relatively small when compared to other celestial bodies in our solar system, so they can be tricky to spot.

Fortunately a live asteroid tracker, produced by TheSkyLive.com has up-to-date co-ordinates so budding astronomers will know when and where to point their telescopes.

As with all astronomical events, the best viewing conditions will be found in rural locations away from any man-made light pollution.

Remember that it can take up to 30 minutes for your eyes to fully adjust to the darkness so patience might be necessary.

Minor Google Meltdown Exposes The World’s Utter Reliance on a Single Tech Company
Deep-Sea Sponges Can ‘sneeze’ Out Mucus, and The Footage Is Weirdly Mesmerizing : ScienceAlert
An Experimental Surgical Robot Is Headed to The International Space Station
A Common ‘Forever Chemical’ Has Just Been Linked to Liver Cancer in Humans : ScienceAlert
New Predictions Reveal The Fate of The World’s Biggest Ice Sheet if We Don’t Act : ScienceAlert