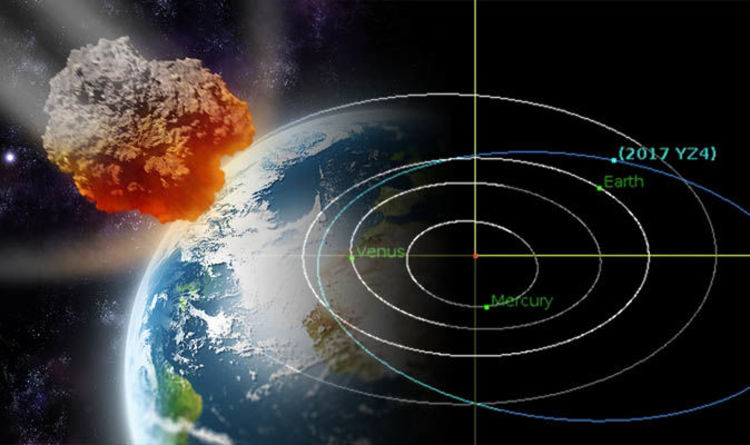 
Asteroid YZ4, which was not spotted by NASA until Christmas Day, will hurtle past Earth at a distance of just 139,433 miles – a stone’s throw in astronomical terms – with the Moon orbiting about 238,000 miles away from Earth.

A NASA spokesman said this is the first known asteroid to flyby Earth within one lunar distance since two asteroids flew past us 35 minutes apart on November 21.

The asteroid is due to pass Earth at a relative speed of 9.55 kilometres per second at 3.56pm GMT on Thursday December 28, according to NASA’s Solar System Dynamics website.

The US space agency monitors any object that travels within six million miles of Earth to prepare for a possible collision.

With a diameter of no more than 15 metres (49 feet), Asteroid YZ4 is fairly small, though could cause serious damage if it slammed into the Earth’s surface.

NASA has insisted it knows of no significant asteroid that is expected to hit the Earth for the next 100 years.

Asteroid YZ4 is from the Apollo group of asteroids, which regularly cross the Earth’s orbit.

They were discovered by German astronomer Karl Reinmuth in the 1930s and named after the first one to be discovered – the 1.5km diameter 1862 Apollo asteroid.

This latest asteroid was observed by operators of the Mount Lemmon Survey Observatory on December 25, in the Santa Catalina Mountains, northeast of Tucson, Arizona.

Deep-Sea Sponges Can ‘sneeze’ Out Mucus, and The Footage Is Weirdly Mesmerizing : ScienceAlert
New Predictions Reveal The Fate of The World’s Biggest Ice Sheet if We Don’t Act : ScienceAlert
A Common ‘Forever Chemical’ Has Just Been Linked to Liver Cancer in Humans : ScienceAlert
Record-Breaking Experiment Could Solve a Huge Challenge in Quantum Computing
An Experimental Surgical Robot Is Headed to The International Space Station