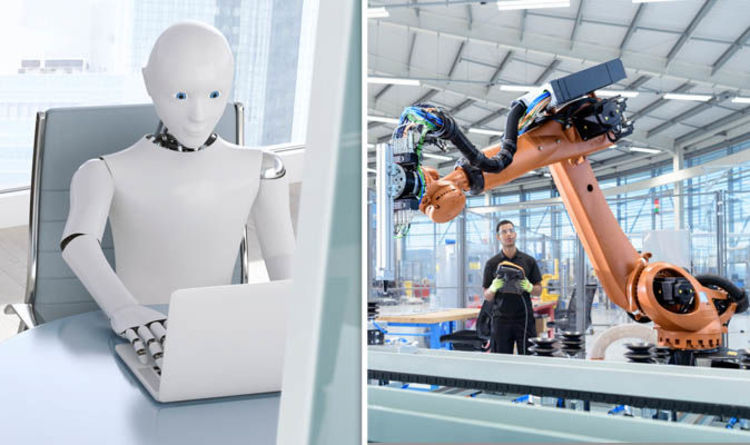 Robots could take over 52 percent of the current workload in less than a decade, forcing humans to rethink how they approach jobs.

According to the Geneva-based World Economic Forum (WEF), the number of robots taking over jobs from people will double from the current 29 percent.

The thinktank warned machines could force 75 million people out of jobs as early as 2022.

The WEF said in a report published today: “By 2025 more than half of all current workplace tasks will be reformed by machines as opposed to 29 percent today.”

The report dubbed this rapid displacement of workers the fourth industrial revolution.

But the shift in workplace dynamics could be offset by robots creating even more jobs than they take over.

Despite forcing tens of millions out of jobs in the next four years, the WEF thinks near twice as many more job opportunities will be created.

The robotisation of the workplace, artificial intelligence and the improvement in technologies could create up to 133 million brand new jobs for humans to handle.

Artificial intelligence: 75 million jobs could be lost to robots in the near future (Image: GETTY)

The WEF report on the future of jobs said: “About half of today’s core jobs—making up the bulk of employment across industries—will remain stable in the period up to 2022.

“Within the set of companies surveyed, representing over 15 million workers in total, current estimates would suggest a decline of 0.98 million jobs and a gain of 1.74 million jobs.

“Extrapolating these trends across those employed by large firms in the global workforce, we generate a range of estimates for job churn in the period of up to 2022.

Lee Jong-Wha, director of the Asiatic Research Institute at Korea University, said the key to surviving widespread automation is education.

The economist argued robots are already putting a number of work sectors under immense pressure.

But Mr Lee said for every job destroyed by a robot a new one requiring human input will emerge.

He said: “The outcome of the race between technology and education will determine whether the opportunities presented by major innovations are seized, and whether the benefits of progress are widely shared.”

Boston University economist Pascual Restrepo said in February this year the process of machines taking over jobs from humans has been evident over the past 200 years.

Dr Restrepo said the automation of the agricultural sector pushed workers into the industrial sector and then the service sector when the industries were automated.

He said: “Who would have imagined 30 years ago that we would have people designing apps, working as software engineers?

“Who knows what our kids are going to be doing 30 years from now?”

But a more dire survey of 46 countries and 800 different work environments in 2017 found the number of people forced out of jobs by machines could near the one billion mark by 2030.

The report published by the McKinsey Global Institute said up to one-fifth of the world’s total workforce will feel the effects of automation.

According to the report, machine operators and food industry workers could be hit the hardest over the next 12 years.

The report concluded new jobs will emerge as a result of robots taking over but some nations will have to invest heavily in the workforce to stay ahead of the trend.

Clinical Trial Restored Sight to 20 People With Corneas Made From An Unlikely Source : ScienceAlert
This Artificial Synapse Can Run a Million Times Faster Than Ones in The Human Brain : ScienceAlert
Robot Shows It’s Possible to Swim Through The Emptiness of a Curved Universe : ScienceAlert
Researchers in South America Discover a New Species of Tiny but Tough Dinosaurs : ScienceAlert
Minor Google Meltdown Exposes The World’s Utter Reliance on a Single Tech Company