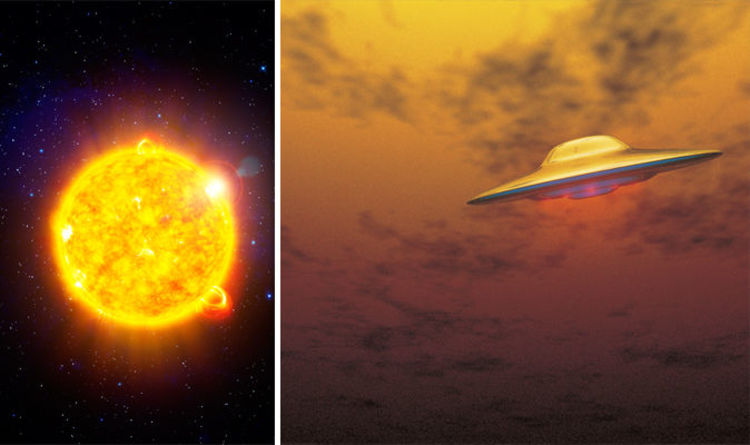 
On September 6, the FBI swarmed the National Solar Observatory (NSO) in Sunspot, New Mexico, with officials remaining at the site.

Authorities are yet to give an explanation as to why there is an FBI presence there, although the solar observatory will reopen this week, sending conspiracy theorists into overdrive.

Six more observatory cameras have gone offline during the time in which the NSO have been shut down.

This includes one in Australia, Chile, Spain, Pennsylvania and two in Hawaii.

Now, one person who was snapping images of the Sun believes she saw a huge UFO followed by a massive fleet of smaller crafts passing behind the sun, leading some to believe that this is why the solar observatories were closed down so the FBI could keep the discovery under wraps.

The image was taken by Maria Hill from Salem, Indiana, on September 11 and appears to show spaceships lurking near to the Sun.

Website UFO Sightings Hotspot believes this is the reason the observatories have been closed down.

The website reads: “If the objects in the images are not lens flares or objects reflecting in the lens of the camera, but massive mother ships and a fleet of smaller UFOs, see images above, then could that be the reason for the sudden shutdown of seven solar observatories?”

The organisation that runs this observatory, the Association of Universities for Research in Astronomy (AURA) has kept quiet through the whole ordeal, but they have now broke their silence.

AURA confirmed that employees will be returning to work this week, stating staff had been removed due to “criminal activity”.

The statement reads: “AURA has been cooperating with an on-going law enforcement investigation of criminal activity that occurred at Sacramento Peak.

“During this time, we became concerned that a suspect in the investigation potentially posed a threat to the safety of local staff and residents.

“AURA determined that moving the small number of on-site staff and residents off the mountain was the most prudent and effective action to ensure their safety.”

This Seemingly Simple Foot Feature May’ve Allowed Sauropods to Become Giants : ScienceAlert
This Artificial Synapse Can Run a Million Times Faster Than Ones in The Human Brain : ScienceAlert
New Predictions Reveal The Fate of The World’s Biggest Ice Sheet if We Don’t Act : ScienceAlert
The Moon Stole Something From Deep Inside Earth Eons Ago, and Scientists Can Prove It : ScienceAlert
Plants Have Been Keeping a Secret From Us About How Thirsty They Actually Are : ScienceAlert