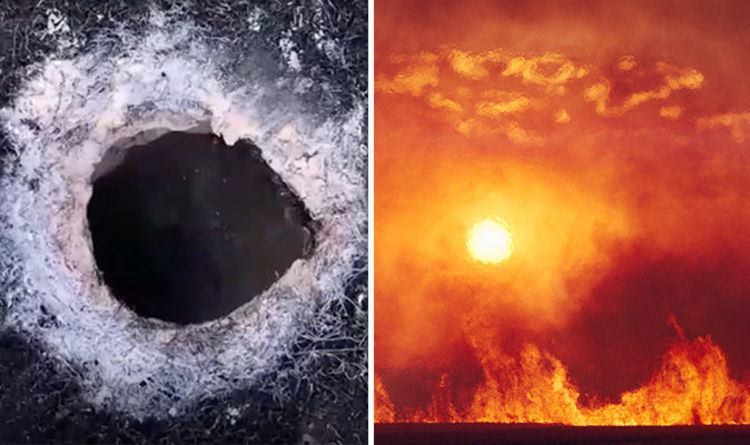 
A small hole in the ground erupted in huge flames last month on a private property in Arkansas, prompting wide-ranging conspiracy theories.

The hole burned for around 40 minutes, as firefighters struggled to put out the mysterious inferno.

Adding to the mystery, the fire was not extinguished by humans but instead suddenly went out.

Despite several tests and investigations, scientists remain baffled by the incident, without any leading theory of cause.

However, Baxter County Judge Mickey Pendergrass has told local media that the investigation has “ruled out spiritual Satan”.

He added: “He didn’t come up and stick his pitchfork in the ground and blow that hole out.”

Judge Pendergrass added that the hole has existed for nearly a decade, but this is the first time that fire has flared out from it.

Theories trying to explain the bizarre incident range from a meteorite, aliens or a gas leak.

Investigations have revealed that there are no utility and fuel lines in the area which could have leaked and technicians from a nearby natural gas company detected no signs of natural gas.

Scientists have also concluded that there were no meteors in the vincity of the area in the last month.

Donald Tucker, chief of the Midway Fire Protection District, said the hole acted “like a chimney”.

Mr Tucker added: “It was drawing air from a lower elevation. Whatever it was, it burned up its fuel and went out.”

While Judge Pendergrass suspects an explosive, witnesses to the fire describe the unusual flame as appearing “clean” and pointing out that the flame did not leave behind any soot or damage.

New Predictions Reveal The Fate of The World’s Biggest Ice Sheet if We Don’t Act : ScienceAlert
An Experimental Surgical Robot Is Headed to The International Space Station
Researchers in South America Discover a New Species of Tiny but Tough Dinosaurs : ScienceAlert
Deep-Sea Sponges Can ‘sneeze’ Out Mucus, and The Footage Is Weirdly Mesmerizing : ScienceAlert
Extreme Drought in Italy Reveals Hidden Bomb Submerged in River Since WWII