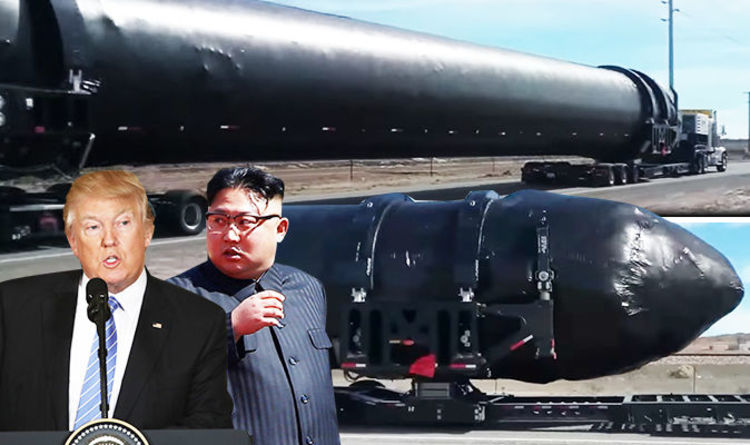 
A video showing what appears to be a black-plastic wrapped nuclear rocket was filmed being driven towards the mysterious US Air Force base in the Nevada desert.

The shocking footage entitled “Nuclear Warhead being hauled to Area 51: Spooky!!” was uploaded to YouTube by a user with the name Cactusface Dave.

He said in a promotional blurb: “We were cruising around on some back roads near Sore Finger Road, and I caught a video of a nuclear missile being hauled in the direction of Area 51.

“Notice the huge police escort. It certainly seemed like they were purposely were avoiding major highways.

“I also noticed the police did not seem happy that I was making this video. God help us all if of this thing ever gets launched.”

Fears of a nuclear WW3 have never been so high since the Cold War after US President Donald Trump and North Korean dictator Kim Jong Un began their war of words of missiles and weaponry.

At an emergency meeting of the United Nations Security Council in December, the US ambassador to the UN, Nikki Haley, warned that “if war comes, make no mistake, the North Korean regime will be utterly destroyed”.

Last month Malcolm Nance, a former US intelligence officer, said Mr Trump could wipe out the rogue state with a nuke in as little as 35 minutes.

He said: “That’s about the time it takes a Minuteman-III ICBM to travel from the Great Plains to Pyongyang.”

Most people hope it remains that a war of words, and the US is not actually preparing to launch a strike.

The video was uploaded in Febryary 2017 – the same month North Korea launched a missile that flew 500km before coming down in the Sea off Japan in what was described at the time as a “show of force” to Donald Trump.

The missile was said to have been of the Rodong medium-range class or a newer type, reaching an altitude of about 550km.

However, fears of nuclear activity at Area 51 seem to have been somewhat allayed by viewers of the video.

Nuclear warheads are only transported in the US with a military, and not just police, convoy.

One YouTube poster said: “If it were a nuke, it would of been escorted by a heavy military convoy with choppers.  Great video though.”

there are other videos on YouTube showing nuclear missiles being transported by US army vehicles.

Several viewers pointed out their own theories as to what it actually was.

Thomas Morgan posted: “That’s a SpaceX Falcon Heavy side booster. One of two boosters with one central core.”