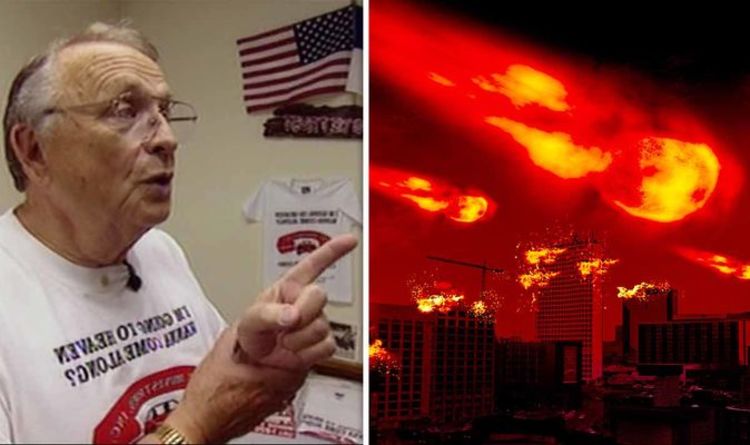 
The apocalypse is said to be a future destructive end-time scenario proposed in the Bible before the return of Jesus Christ. Described in the Book of Revelation, the final book of the New Testament, this doomsday event details the apparent final destruction of the world before the second coming. Christians believe they will then face divine judgement, where a decision is made whether they live for eternity in heaven or face the terrifying wrath of hell.

The event is believed to occur once the messianic prophecies quoted in the religious text are fulfilled.

Mr James, who runs the GOTEL Ministry in Cleburne, Texas, US, is a former marine and revealed why he expects an imminent doomsday.

He said in 2000: “I expect him [Jesus Christ to return] constantly, momentarily.

“Right now I expect him.

“There is nothing that has to be fulfilled for him to return and save people like me and my wife.

“You will be left here on Earth because you are not born again.”

Mr James went on to reveal why he thought he would go to heaven and Mr Theroux may not.

He added: “We are going to be called up.

“Their bodies will be raised from the graves.

“They will have a new body and come up out of that grave – fitted for eternity.”

While Mr James claimed he expected an imminent doomsday, he could not explain what he thought would happen.

He continued: “Nothing else has to happen, in prophecy for the Lord to call up his Church – it has all been done.

“In an instance, in the twinkling of an eye, the trumpets shall sound and the dead in Christ shall rise.

“You will know, it’s going to be very different.”

The claim comes after archaeologists believed they uncovered the true identity of the Devil discussed in the Bible.

In chapter 13, the Number of the Beast – 666 – is described as an antagonistic creature that appears briefly about two-thirds into the apocalyptic vision.

Since then, 666 has become one of the most widely recognised symbols of the Devil and is used to invoke Satan.

However, the numerical value may have a secret hidden meaning, revealing the true identity of the Devil, it has been claimed.

“When you apply numerical values to the name Kaiser Neron and you add them up, you come to 666.”

Patterns Formed by Spiral Galaxies Suggest The Universe’s Structure Isn’t Totally Random
The Sun Just Spat Out Its Biggest Flare Since 2017
SpaceX’s Starship Prototype Just Erupted in a Dramatic Fireball During Testing
For The First Time Ever, Scientists Have Created Hexagonal Salt
Study Reveals Why Large Groups of Humans Are Hopeless in a Crisis