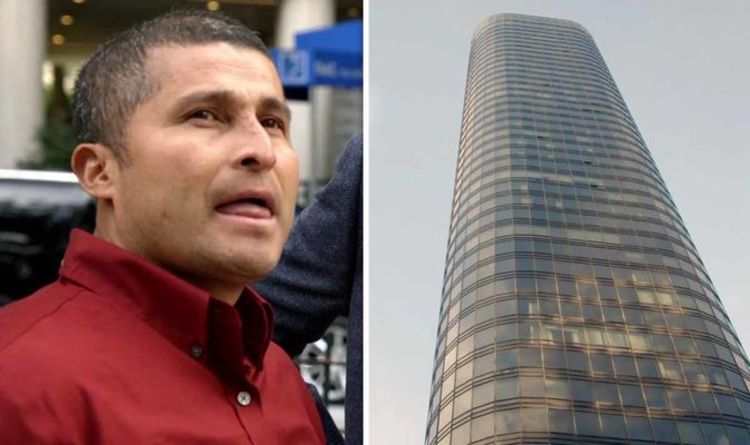 
A miracle is an event that does not fit natural or scientific laws, which may seem almost supernatural. What happened to Alcides Moreno on December 7, 2007, certainly seems to fit that bill. The Ecuadorian, 49, fell from the 47th floor while cleaning the windows of the Solow Tower building in Manhattan’s Upper East side of New York City, US.

Mr Moreno revealed during Morgan Freeman’s “The Story of God” series how the terrifying ordeal played out.

He said in 2017: “I woke up in the morning took my car in and commuted from New Jersey.

“I got to the building and took the elevator all the way to the top – 47 storeys – and then climb onto the platform.

“We just began to lower the platform when one of the cables snapped.

“I just grabbed the scaffold and held on until another cable snapped.”

Mr Moreno then plunged 472ft, surviving only thanks to the platform he was working on getting lodged against a neighbouring building.

He added: “The paramedics, they found me right in the middle, the scaffold snapped in half and was lodged between the two buildings.

“It was right in the middle, they picked me up from there and took me to the hospital.

“I didn’t wake up from a coma until December 24, right there in the bed and my wife was there.

“I was [eventually] able to walk and everything, the doctor told me ‘you are a miracle’”.

During the incident, Mr Moreno broke 10 bones, his lungs collapsed and he needed 43 pints of blood and plasma.

Only half the people who fall from three storeys survive and from ten storeys almost no one does.

However, Mr Moreno is not convinced what happened was a miracle, as his brother – Edgar – who was on the platform with him, did not survive.

He continued: “I still don’t know [what I think happened].

“My brother is a big loss, we were really, really close.

“That was a great man, I just wanted to bring him to work with me to help him out because he was younger than me and a good man.

“I think God saved me, but I want to ask him ‘why me? What happened? Why?’ Maybe it was a second chance to keep going.

“I am looking forward to finding out why.”

Accident investigators also concluded that although Alcides Moreno had stepped on to the scaffold without wearing a safety harness, this did not prove that he had refused to use it.

Since he had also not yet retrieved his window washing equipment from the roof they said that he might still have intended to go back and put on the harness before starting work.

Mr Moreno received a substantial compensation payout and he and his family moved to Phoenix, Arizona, US.

He says the warm weather there is good for his bones.

SpaceX Has Now Safely Delivered Astronauts to The Space Station
SpaceX’s Starship Prototype Just Erupted in a Dramatic Fireball During Testing
If SpaceX’s Rocket Fails, an Emergency Escape System Will Save The Astronauts Onboard
We Might Finally Understand Why Glass Frogs Have Strangely Transparent Skin
Boys End Up in Hospital After Trying to Gain Superpowers From a Black Widow Bite