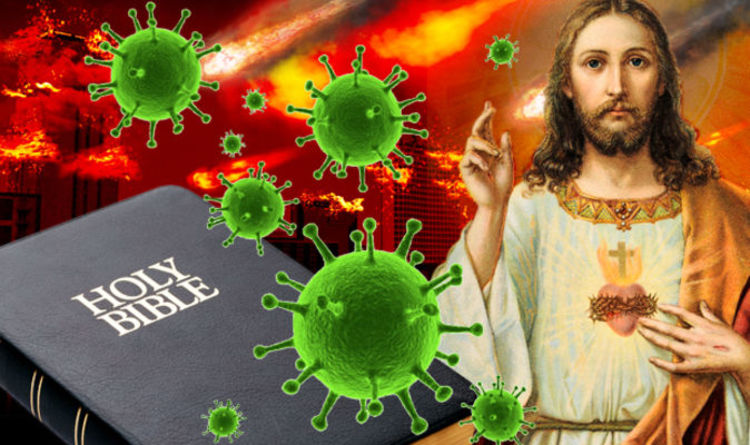 
Christian conspiracy theorists have analysed a recent study from Germany which said that a viral attack could kill close to one billion people.

In the simulation from Johns Hopkins University, the pathogen acted in a similar manner to SARS and showed just how difficult an outbreak could be to control.

The virus gave the infected a fever, cough and confusion. It later mutated in patients and caused encephalitis — swelling in the brain – which left individuals in a fatal coma.

After 20 months the virus, which was difficult to cure, had killed more than 150 million people in the simulation – and there is no sign of a vaccine being created.

If efforts to create a vaccine continued to fail, Dr Eric Toner, a senior scholar at the Johns Hopkins Center for Global Health Security and the designer of the Clade X simulation, said 900million or nearly 10 percent of people on the planet could be killed.

The simulation was as realistic as possible with a disease which could plausibly exist and included the technology and knowledge which we have today.

Now, some Christian groups believe the study was a precursor to a real event, which has been highlighted in the Bible.

Website Sign Post of The Times states: “From the book of Revelation we read that war, famine and disease, (pandemics), will wipe out a quarter of the Earth’s population during the first half of the Tribulation.

“Given the Earth’s present population of 7.6 billion and that perhaps 600 million of those may be snatch away at the Rapture of the Church, that would suggest that somewhere around 1.75 billion people would perish, (with at least half of that number coming from pandemics if the article below is to be believed).

“Aside from the warnings of global pandemics, there is so many other things going on that indicate the shortness of the days until Christ’s return.”

The Tonga Eruption’s 50 Million Tons of Water Vapor May Warm Earth For Months to Come : ScienceAlert
JWST’s First Glimpse of Mars Reveals The Red Planet in a New Light : ScienceAlert
The Remains of This Recently Found Ancient Structure Are Even Older Than The Pyramids : ScienceAlert
Termites Love Global Warming So Much That They May Make It Worse, Says Study : ScienceAlert
The Frogs Vanished, Then People Got Sick. This Was No Harmless Coincidence. : ScienceAlert