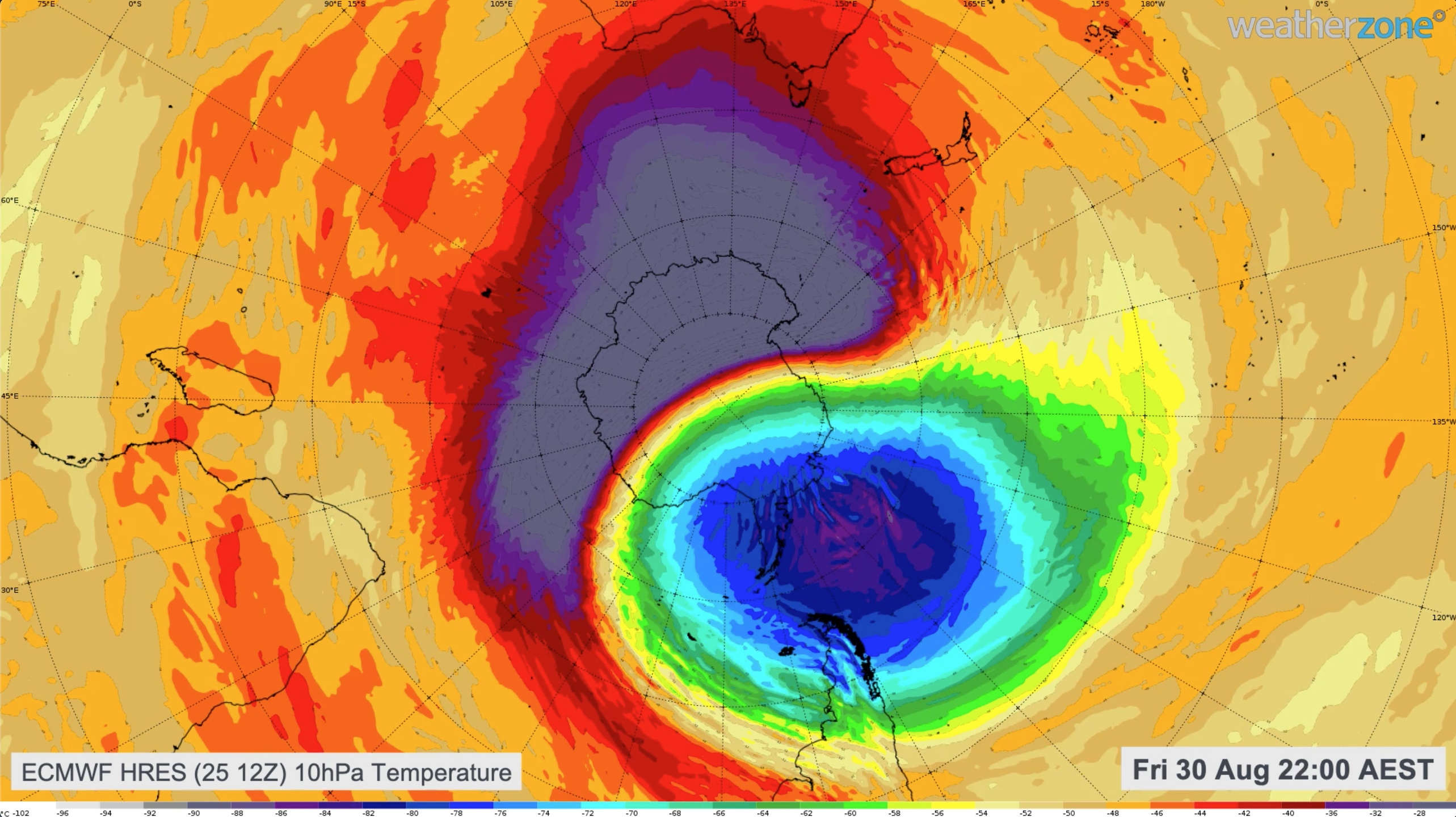 
A Sudden Stratospheric Warming is currently sweeping across parts of Antarctica right now.

This is only the third such anomalous event in the southern hemisphere after 2002, and twice in 2010. Find out now what they are and what are their possible impacts below.

A Sudden Stratospheric Warming is set to take place mid September across Antarctica with its effects potentially being felt across Australia and New Zealand.

This event has the potential to be unprecedented for the Southern hemisphere due to its abnormal / rare occurrence and its potential strength which models are showing already.

So what is a ‘Sudden Stratospheric Warming’?

A Sudden Stratospheric Warming is when the temperature between 10km (30,000ft) and 50km (150,000ft) in the Stratosphere undergoes rapid warming (in the vicinity of at least 50ºc in the space of just a few days). The warming occurs so high up in the atmosphere that we are completely oblivious to it at the surface.

But how can it warm so quickly?

Every year, strong Westerly winds will circulate around the Antarctic (or Arctic). These winds form what we know as the stratospheric polar vortex which occurs high above the poles and produces excessive amounts of cold air.

In some instances though, these winds will weaken for a period of time – more commonly between the changing of seasons into Winter and out of Winter when the atmosphere itself is changing.

As these winds weaken, they can sometimes reverse and move from East to West instead. This causes the colder air to descend in the polar vortex and the air replacing it above is much warmer – which leads to a rapid warming and thus a Sudden Stratospheric Warming.

How does it affect our weather?

There aren’t too many cases that have been documented and so the overall understanding is limited. There have been cases in the Northern Hemisphere in recent history, from 2009-10, 2013 and what was dubbed ‘the beast from the East’ in 2018. So let’s take those examples and try to extrapolate what such a weather anomaly means for New Zealand and Australia.

As the jet stream snakes more in its shape, it has tended to create large areas of blocking high pressure. In the Northern Hemisphere, these high pressure regions have typically developed over the Northern Atlantic Ocean and Scandinavia. What this has meant, is the area in between – the United Kingdom – has had extensive periods of dry, very cold (often icy) weather.

In other words, those typical conditions where its a blue sky but so cold that its like the morning frost cant melt. Southern Europe during this same time, was slightly milder but also very wet and windy. The boundary between the large area of prolonged dry and wet and windy (between the United Kingdom and Southern Europe) has lead to extremely snowy conditions. The effects of these events at the surface may only begin to appear weeks after the event started 50km above the surface, so while its already underway now over Antarctica – we may see nothing until mid September.

What Does That Mean For Australia and New Zealand Weather?

How can we translate this to Australia and New Zealand. Well we can’t really as we don’t know where the 2 blocking high pressure systems will be and where the ‘in between’ will be.

But we can assume that there will be 2 large area of high pressure, in between them will be an area of very icy, cold, dry conditions.

There, such weird footages of kangaroos bounding through the snow could become a new normal:

North of that will be an area of very wet and windy conditions, and in between will be very snowy.

Whether that actually happens over Australia or South of Australia will be a wait and see game, but given we are closer to the Equator than the United Kingdom, chances are our impacts will be less than theirs during the 2018 ‘Beast from the East’ event.