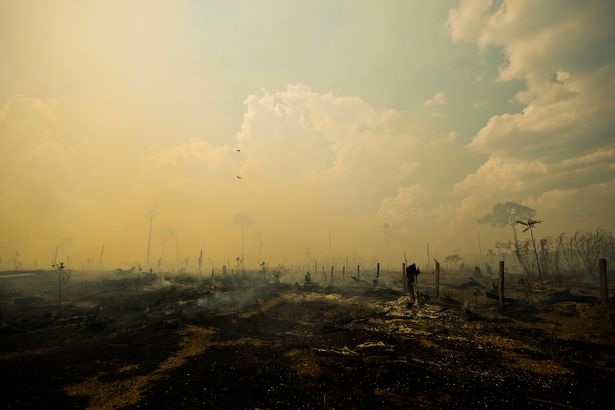 
This is a grim report of the Amazon fires by Christopher Bucktin from Porto Velho in Brazil.

As I trudged through the fires raging in the Amazon, the intense heat not only wrenched every last drop of perspiration from me, it also scorched my skin, melted my shoes and burnt my clothes.

After a week in the rainforest – alongside the firefighters desperately trying to save this precious resource from destruction – I feel like I have been led to the gates of Hell.

I’m in Brazil, deep in the heart of the Amazon’s most fire-ravaged area, and the devastation seems endless.

This part of the world’s greatest rainforest looks like a smouldering wasteland.

Many of the fires are believed to have been started by armed crime gangs intent on clearing the forest to illegally sell the land to cattle ranchers.

We drove hundreds of miles through Rondonia state, in northern Brazil, to witness the scale of the disaster, which is nearly as much a calamity for us in Britain as it is for South America.

The Amazon’s 2.1 million sqm of trees produce more than 6% of Earth’s oxygen, making it an irreplaceable resource for all humanity.

Yet, according to the country’s foreign minister Ernesto Araujo: “The Amazon is not burning, not burning at all.”

His claims are backed up by Rondonia’s governor, Marcos Rocha, who dismissed the “fuss” over the fires as a foreign ruse to hinder Brazil’s economy.

Retired police colonel Rocha previously told The Guardian: “If we look at the situation in other countries, their forests are burning much more than in Brazil. You go to London or other countries, and what do you see? Smoke from burning, from industry. How can they demand of us what they haven’t done themselves?”

Despite the official denials, the firefighters in Rondonia’s capital Porto Velho – a small band of dedicated men and women at the city’s Brigade Municipal – have no doubt about the severity of the crisis.

Often armed with little more than a jet wash and fire beaters – and endless courage – they risk everything to fight the blazes.

In the last three weeks they have attended hundreds of calls. This week, they invited the Mirror to join them on the front line, to see the destruction and the colossal task they face.

Fire chief Rosenberg Barbosh said: “It has been relentless. We have attended dozens of fires [a day]. Hundreds of miles of rainforest have been destroyed, and we have probably not seen the worst of it yet. Every year we educate people against fire-starting, but it appears the more we do, the worse it gets. It leaves us with little faith that people will ever understand they need to protect the environment.”

Rainforests, and none more so than the Amazon, play a vital role in sustaining life on Earth, and helping to slow the rate of climate change.

Their trees not only produce oxygen, but also capture greenhouse gases such as carbon dioxide. This prevents the gases from accumulating in the atmosphere and warming the Earth to dangerous levels.

Now, as the Amazon burns, CO2 levels are at an all-time high. But Brazil’s firefighters are given little help by government.

There is no question that the policies of the new far-right president, Jair Bolsonaro, are fuelling the crisis.

After being threatened with trade sanctions by some leaders at the G7 summit last month, Bolsonaro agreed to send 43,000 troops to tackle the fires.

But locals in Porto Velho have seen no military so far. Even the water plane that once occasionally buzzed overhead has vanished.

Gone are the pristine forests, crystal-clear rivers and clean air the inhabitants once enjoyed.

“This place was once heaven. It’s now like living at the gates of hell, only the heat is greater.”

On Monday, as temperatures reached 39°C after days of no rain, the brigade was called to a 150-acre fire that destroyed a local plantation.

In a pick-up truck and an old car, nine firefighters raced to fight the fire with beaters and a jet wash.

Hours later, a 16,000-litre water truck arrived to douse down the flames. The teams are painfully ill-equipped for the task.

None of them have breathing apparatus – they get only overalls, a balaclava and ski goggles for protection – but they do their work without fear.

Like with the vast majority of the fires it was unknown who started the blaze.

During our race to the scene, we saw several discarded petrol cans, plastic containers and buckets all steeped in the smell of fuel.

Armed land grabbers are known to be acting across Rondonia. They illegally start fires to clear the forest, before then selling the land to farmers and ranchers.

But victims are too afraid to report the crimes. Adriana Ferrerira, 48, lost everything after his farmstead was burnt.

He said: “My coffee plantation has gone, the bananas have been destroyed as well as the pineapples. Everything I have worked for seven years has been destroyed in seven hours. I took out a loan to pay for the land, and now I don’t know how I am going to pay it back. This will bankrupt my family and leave us destitute.”

2019 Amazon Fires in Comparison to Other Years

Rondonia has had more than 6,800 fires so far in 2019, according to Brazil’s National Institute for Space Research.

NASA says the state is one of the most deforested in the Amazon.

As the rate of land clearance reaches one and a half football fields a minute, many analysts fear we are nearing the tipping point.

And firefighter Agnaldson Braga said it is a vicious circle.

He explained: “The drier the land gets, the more susceptible it is to fire. The more fire, the less forest. A self-fulfilling cycle has already begun. The question is when does it become irreversible.”

Rosana Villar of Greenpeace says Brazil could face permanent changes to its ecology.

She said: “The Amazon is extremely fundamental for the water system all over the continent. If we cut off the forest we are some years not going to have rain in the south.”

And, after seeing first hand the devastation in the Amazon, it’s hard to view any apocalyptic predictions about the fate of our earth as alarmist.

Meanwhile, in other parts of the Amazon forest, baffled scientists have recently discovered that its highest trees have become 50% taller. Well, do you think they will survive those illegal fires or chainsaws?