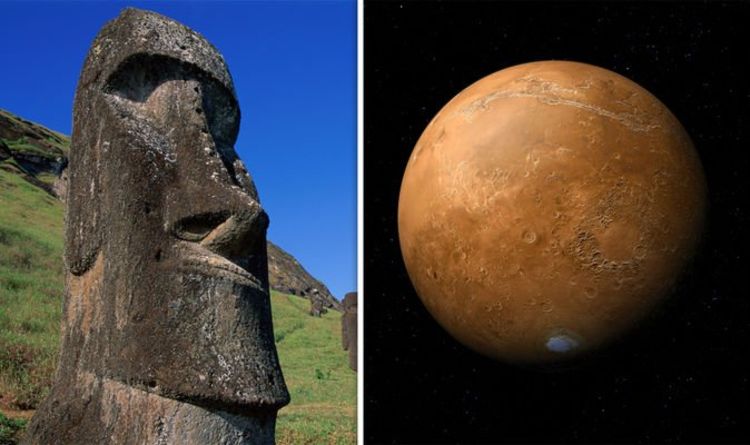 
While browsing through NASA images of Mars, one UFO hunter believes he has found evidence of an ancient civilisation. The alleged evidence comes in the form of a stone carving of a face, which is roughly one and a half metres in height. This has drawn comparisons from conspiracy theorists with the huge figures of Easter Island, and is evidence that a civilisation once conquered the Red Planet.

He said: “I have to say this is one of the most amazing discoveries I have ever made.

“This face above shows a crown, face, cloak over shoulders and chest of the person. This sculpture was placed on a hill in a way that it can overlook a large area of Mars.

Mr Waring is so convinced the finding is evidence of an intelligent race on Mars that he called into question the competence of NASA for not reporting it to the public.

The conspiracy theorist continued: “NASA’s lack of effort and lack of information about these alien artefacts is proof that they are not doing their jobs.

“I can’t help but wonder why people still trust NASA when they have lied to the public for over five decades?”

Meanwhile, others would argue there is a more logical explanation for the supposed head-shaped rock.

Sceptics and NASA would say the statue head and other similar findings are just the effects of pareidolia – a psychological phenomenon when the brain tricks the eyes into seeing familiar objects or shapes in patterns or textures such as a rock surface.

This would mean the supposed statue head could just be a misshapen rock.

Vast, Ghostly Spiderwebs Are Blanketing The Australian Countryside, Again
Darwin Made an Error About Sexual Selection, New Research Reveals
Drone Footage Shows Even Killer Whales Have Close ‘Friends’
Leading Scientist Warns an Irreversible Arctic Tipping Point May Already Be Triggered
Massive Icebergs Once Made Epic Trek All The Way From Canada to Florida