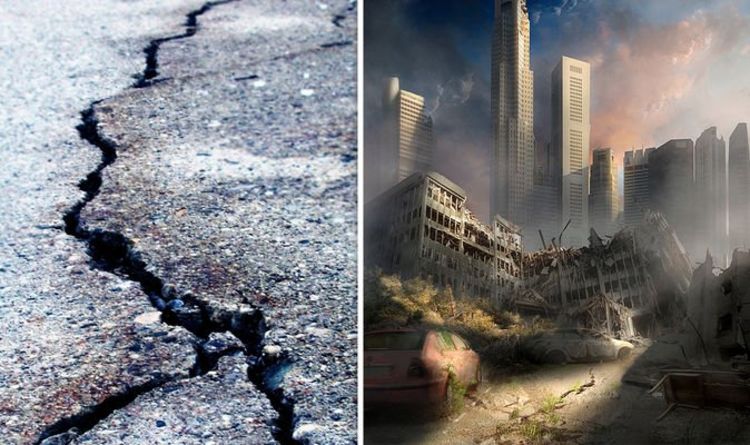 
Mercury, Earth, Venus, Neptune and the Sun began lining up in the solar system on Monday, March 25, and the ensuing gravitational pull on our planet could cause a major earthquake. This is because the pull of the planets is having a tug-of-war effect on Earth, causing tension to build within the tectonic plates. The earthquake forecast was made by new-age earthquake researcher Frank Hoogerbeets on his website Ditrianum.

Mr Hoogerbeets believes a powerful earthquake is due in the coming days, and it could register at magnitude eight on the Richter scale.

Anything above an eight is considered a “great earthquake” and “can totally destroy communities near the epicentre”, according to the forecaster, Michigan Tech.

Mr Hoogerbeets’s website said: “Exceptionally critical planetary and lunar geometry on March 24, 25 and 26 may trigger large to mega-thrust seismic activity from the 25th to the 30th whereby the most critical days will be March 28, 29 and 30.

“A mid to high 7 magnitude earthquake may occur in this time-frame, but it could very well go over 8 magnitude or worse.”

However, there is some suggestion that Mr Hoogerbeets did correctly predict the powerful 7.3 magnitude quake which hit on March 1 in Peru.

He wrote on his website prior to the quake: “Specific lunar geometry today could cause some seismic increase in the next two days, possibly into the 6 magnitude range.”

But it is likely to be a coincidence, as Peru is prone to earthquakes as the South American nation sits upon the dreaded Ring of Fire.

A Massive Star Has Disappeared From a Distant Galaxy, And No One’s Sure Where It Went
Neptune Rains Diamonds, And Now We Might Finally Know How
Physicists Have Observed Light Flowing Like a River, And It’s Beautiful
The Bizarre ‘Flight’ of Tree Snakes May Have Just Been Explained by Physics
New Analysis Says Coal’s Hit a ‘Tipping Point’ And No Longer Makes Financial Sense