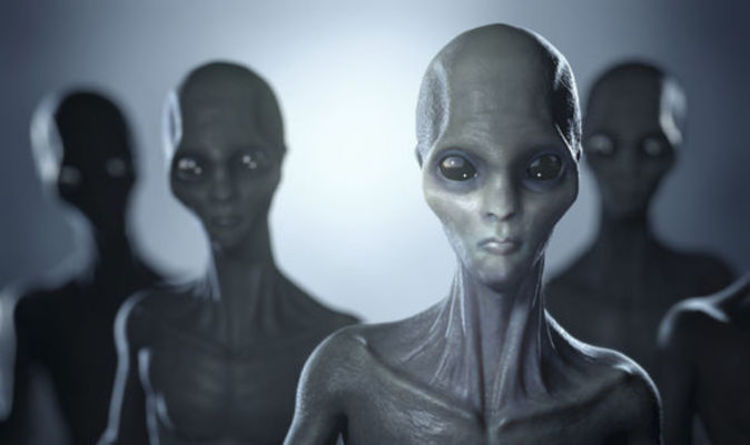 
In a witness report to the National UFO Reporting Center (NUFORC) he said: “A light overpowered my headlight, which made me stop and look behind me.

“I witnessed a solid white light with pinkish strobe lights on either side of the main white light in the middle.

“Together they formed an oval saucer shape.”

He said the blinking lights had no rhythm.

The man added: “It was close enough to me that it lit up the entire ground and trees around me.

“I killed the snowmobile and the object made absolutely no noise whatsoever.

“It hovered silently slowly moving up and down and they drifted far to the right and slowly went away from me.

“I tried chasing it through the woods, until it flew in a different direction that the trail went, so I lost sight of it.”

He called his wife to explain what happened in the “10 minutes” after he left her and he said she yelled at him that he had been gone for more than two hours.

Thousands of people each year claim to be abducted by aliens.

It often involves reports of missing time and memory loss after seeing a UFO.

Many people undergo regression and it is only then that they remember seeing aliens and being inside a craft.

NUFORC is one of the world’s biggest organisation dedicated to UFO and alien abduction research.

The incident happened on February 28.

A NUFORC report on the case said: “An adult male, former military, was riding on his snowmobile, when he became aware of a bright source of light that was illuminating him from behind, and which illuminated quite brightly the area around him.

“The witness stopped the engine on the snowmobile, at which time he noticed behind him an object that seemed to be totally silent, which appeared to be moving slowly up and down.

“Although he was just a few minutes’ ride from his home, at the time of the sighting, he did not arrive there until two hours later, for which he had no explanation, and which had caused his wife a great deal of consternation.”

There is no scientific evidence to support the theory of alien abductions taking place, but many people report the experience and their stories are remarkably similar.

Sceptics say this is because the stories are now repeated online and people are able to read them and then recount similar tales.

Orcas Are Contaminated With a Forever Chemical Associated With an Unlikely Product : ScienceAlert
A Billion-Dollar Biotech Company Plans to Bring The Dodo Back to Life : ScienceAlert
Incredible ‘Fairy’ Robot Sails on The Breeze Like a Floating Dandelion : ScienceAlert
We Used to Hate Commuting. Now We Realize We’ve Lost Something. : ScienceAlert
Bigfoot Has a Very Simple Explanation, Scientist Says : ScienceAlert