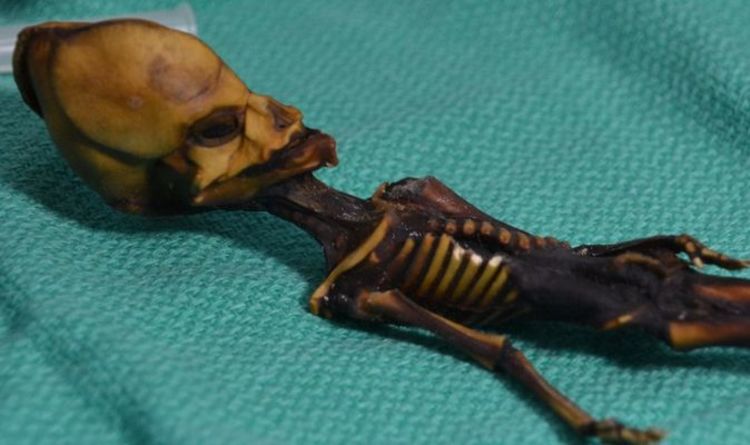 
Dr Steven Greer, a former emergency doctor who has become one of the world’s leading so-called “alien disclosure” campaigners featured it in a number of documantaries as a possible history-changing find that had many anomalies meaning that it may not be human, including ten, instead of 12 ribs, a large cone-shaped head.

But scientists he commissioned to carry out further DNA tests have confirmed the corpse was a very unfortunate human being.

Test by experts at Stanford University and the University of California found the skeleton belonged to a human female baby, who suffered an array of genetic mutations.

She probably did not survive long after birth and it is believed the corpse could be no more than 40 years old.

Dr Garry Nolan, professor of microbiology and immunology at the Stanford University School of Medicine, began the scientific study after Dr Greer contacted him in 2012.

He said: “I had heard about this specimen through a friend of mine, there were some extraordinary claims put forward, and I managed to get a picture of it.

“You can’t look at this specimen and not think it’s interesting. It’s quite dramatic. So I told my friend, ‘Look, whatever it is, if it’s got DNA, I can do the analysis.”

He took DNA from bone marrow in the ribs, comparing it to human and primate genomes.

These tests showed the mummy was human, and female.

The mix of Native American and European DNA was typical of the region of Chile.

The smallest baby ever born was recorded at 8.8 inches, so “Ata” as she is now called is history-making in that respect at nearly two inches shorter.

Genomic results found many mutations in seven genes that separately or in combinations contribute to various bone deformities, facial malformations or dwarfism.

He said: “Maybe there’s a way to accelerate bone growth in people who need it, people who have bad breaks.

“The symptoms and size of this girl were extremely unusual. Nothing like this had been seen before. Certainly, nobody had looked into the genetics of it.”

Dr Atul Butte, director of the Institute for Computational Health Sciences at the University of California-San Francisco, added: “For me, what really came of this study was the idea that we shouldn’t stop investigating when we find one gene that might explain a symptom.

“It could be multiple things going wrong, and it’s worth getting a full explanation, especially as we head closer and closer to gene therapy.

Dr Nolan said the corpse may be no more than 40 years old and should receive a proper burial now.

He said: “We now know that it’s a child, and probably either a pre or post-term birth and death.

“I think it should be returned to the country of origin and buried according to the customs of the local people.”

The research was published in the journal Genome Research.

Dr Greer has yet to comment on the findings.

The Latest Milky Way Survey Shows Off an Incredible 3.32 Billion Celestial Objects : ScienceAlert
Earth’s Inner Core May Right Now Be in The Process of Changing Direction : ScienceAlert
An Iceberg The Size of London Has Broken Free From Antarctica Ice Shelf : ScienceAlert
There’s a ‘Lost City’ Deep in The Ocean, And It’s Unlike Anything We’ve Ever Seen : ScienceAlert
Hypertension Drug Shown to Extend Lifespan And Slow Aging in Animals : ScienceAlert