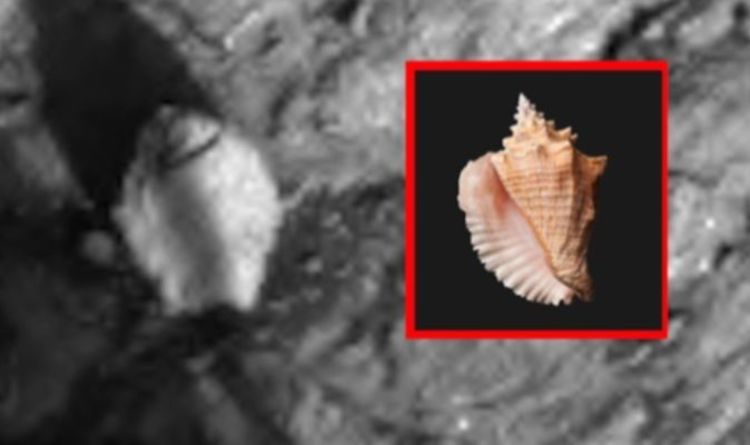 
Two alleged sea-shell like objects have been identified in images taken by the NASA Curiosity rover, according to alien hunter Scott C Waring.

He wrote on Ufossightingsdaily.com: “I found evidence of an ancient ocean today.

“The most recent load of photos were uploaded from the Curiosity rover today and I noticed that there were two seashell-like objects within a metre of the rover.

“One is a very vibrant white that really stands out from its dull surroundings.

“The other is more grey and similar in size to the first one.

“Both have a twisted end and a pointy end.

“Each also have a fold on one side which allows for an opening for the animal to live in.”

He said it was not the first time a seashell had been found by him in Mars images, claiming to have discovered about 15.

He added: “Just go to google, and search seashell on Mars. It will surprise you.”

Mr Waring, who runs website Ufossightingsdaily.com, spends hours scouring the pictures taken by the rover, which NASA then places online.

He claims to have found an array of signs of life in the pictures, including other aliens, buildings, creatures and fossils.

There is a popular conspiracy theory an advanced civilisation once thrived on Mars, but it was killed off by an inter galactic nuclear war.

This week Mr Waring also claimed to find two alien-being figures on the surface in another image.

NASA does not agree and says it has found no evidence in any rover images of signs of even the most simplistic forms of life.

It has found traces of water on Mars and earlier this month pictures emerged that could have contained fossils of very simple forms of life, but so far, it is inconclusive.

However, NASA does agree that Mars was probably once covered in huge oceans much like Earth, however it lost them after the planet was stripped of its atmosphere by solar winds from the Sun billions of years ago.

An Experimental Surgical Robot Is Headed to The International Space Station
‘Structured Water’ Is Not What People Claim. Don’t Believe The Hype, Scientist Says
Record-Breaking Experiment Could Solve a Huge Challenge in Quantum Computing
Water Can Spontaneously Form Hydrogen Peroxide, And We Finally Understand Why
Extreme Drought in Italy Reveals Hidden Bomb Submerged in River Since WWII