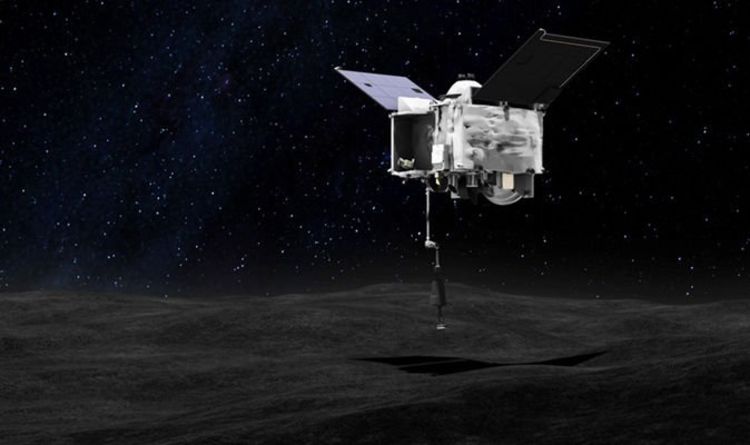 
On Monday December 3, NASA’s OSIRIS-Rex spacecraft arrived successfully at Asteroid Bennu after completing a gruelling two year journey. The spaceship successfully made contact with the asteroid at 5.09pm GMT on December 3, after travelling more than a BILLION miles through the cosmos. Scientists at the space agency were ecstatic when OSIRIS arrived at the half-a-kilometre long space rock, but some conspiracy theorists believed NASA missed an alien structure on the asteroid.

As the spacecraft approached, some believe they saw “non-reflective black structures” on Bennu.

According to UFO enthusiasts, this is usually the sign of a artificial structure, and in this case a sphinx, similar to the one built by the ancient Egyptians.

The discovery was made by prominent conspiracy theorist Scott C Waring who was analysing images from OSIRIS.

Mr Waring wrote on his blog UFO Sightings Daily: “I have found alien structures on every meteor, asteroid, moon and planet in our solar system using NASA, ESA and JAXA photos of the surfaces of those objects.

“I found many non reflective black structures on asteroid Bennu today. The most significant of all is a sphinx black structure with a long tail, but its curled in an oval like a dog.

NASA would however argue that the ‘sphinx’ is actually a result of poor camera quality on OSIRIS or the effects of pareidolia – a psychological phenomenon when the brain tricks the eyes into seeing familiar objects or shapes in patterns or textures such as a rock surface.

NASA’s spacecraft will spend two years flying alongside Bennu at a distance of nearly 12 kilometres from the object, regularly making physical contact to collect two kilograms of samples from the massive space rock.

This could pave the way for an asteroid mining industry, with some of them worth trillions of dollars because of their minerals which are scarce on Earth such as platinum.

It will also give vital information on how to deflect asteroids from their collision course with Earth.

A Strange Thing Happens to Wolves Infected by Infamous Mind-Altering Parasite : ScienceAlert
Do You Need to Drink Eight Glasses of Water a Day? It’s Complicated : ScienceAlert
Chilling Glimpse Into Our Future if We Survive Another Million Years : ScienceAlert
A Tobacco Plant Has Been Engineered to Produce Cocaine in Its Leaves : ScienceAlert
Two Black Holes Met by Chance, And It Created Something Never Seen Before : ScienceAlert