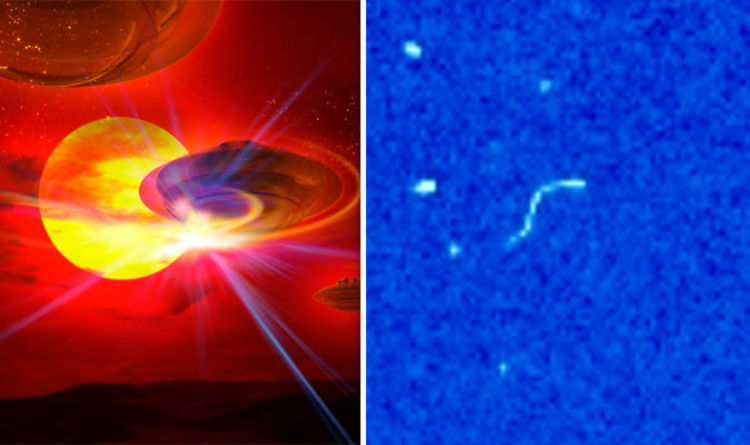 
The Solar and Heliospheric Observatory (SOHO) spacecraft captured an image of what seems to be an unidentified object making sharp twists and turns in space yesterday.

The object seems to leave behind a trail which shows that it is twisting and turning as it soars through the cosmos.

Most objects such as meteorites and asteroids travel in a straight line through space, unless the gravitational pull of a planet or star for example alters its course.

However, the images from SOHO show the strange object manoeuvring in a way which suggests that it is being controlled as it darts around the cosmos.

Alongside pictures, the site’s author, Scott C Waring, writes: “When an object travels in space in a straight line, it creates confusion about what it is – a meteor, comet or UFO?

“But when an object is captured by an impartial SOHO camera and is seen to weave back and forth making two 45 degree turns in just mere seconds, then we now that only an intelligently controlled craft could be capable of such manoeuvres.

“This is 100 percent evidence that this is an alien craft.”

The discovery follows on from the sudden closure of the Sunspot Solar Observatory in New Mexico, which led many to believe experts had spotted a UFO near the sun.

On September 6, the FBI swarmed the National Solar Observatory (NSO).

The site was closed down for several weeks without an explanation as to what was happening.

Conspiracy theorists quickly leapt forward with their answers, with many believing the observatory had spotted a UFO and were attempting to keep it under wraps.

However, the truth was actually far more sinister.

“The source of child pornography was traced to an IP address used at the observatory and a source within the building observed a computer with ‘not good’ images on it.”