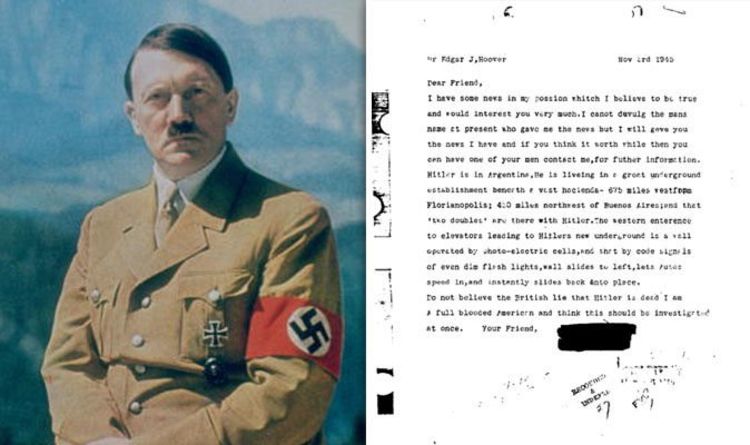 
The Nazi leader famously killed himself in his Berlin bunker on April 30, 1945, after he was surrounded by the Red Army. His body was then burned immediately, with no remains believed to have been left behind. However, declassified FBI files prove the US government seriously investigated the possibility he actually escaped a day earlier.

The papers, which have been blacked out to protect the identity of officers involved, detail how agents visited South America after reported sightings.

The documents claim Hitler arrived with around 50 others including Eva Braun, his dog and a personal doctor, as part of a pre-arranged deal with Argentinian officials.

Harry Cooper, who has been researching the rumoured escape for years, says he can document up to three decades of Hitler’s survival.

He claims he and his team can piece together evidence proving Hitler flew from Germany to Spain on April 29, 1945.

“We broke the initial story about 15 years ago when our book came out,” he revealed on Amazon Prime’s 2015 series “Adolf Hitler’s Great Escape”.

“One of our agents was living in the National Archives pulling out dusty old boxes of material finding things that proved Hitler’s escape.

“We have hundreds of documents from the FBI that flat-out state Hitler got away and they knew it.

“They named the farm he was staying on in Spain while he waited for transportation to Argentina.

“They knew it and the documents were all top secret until we got them declassified.”

Cooper also previously claimed he had witnesses who saw Hitler’s personal pilot – Hanna Reitsch – enter his bunker the day before his alleged death.

However, conspiracy theorists have long enjoyed the idea Hitler made it out alive due to the bizarre circumstance around his death.

A recent investigation put an end to that speculation, though.

In 2017, French-led pathologists were finally allowed to inspect a set of teeth found at the scene and kept hidden by Russian authorities for 70 years.

They confirmed Hitler’s body had been burned at the scene.

Mars Once Had So Much Water, It Could Have Been An Ocean World, Scientists Say : ScienceAlert
Crocodiles Seem to Be Thriving in a Toxic River That’s More Like a Sewer. Here’s Why : ScienceAlert
Earth’s Oxygen Came From an Unexpectedly Deep And Hot Source, Study Suggests : ScienceAlert
We May Finally Know How Lightning Gets Its Zigzag Shape : ScienceAlert
Cannabis For Pain Relief? Review of 20 Studies Provides Sobering Results : ScienceAlert