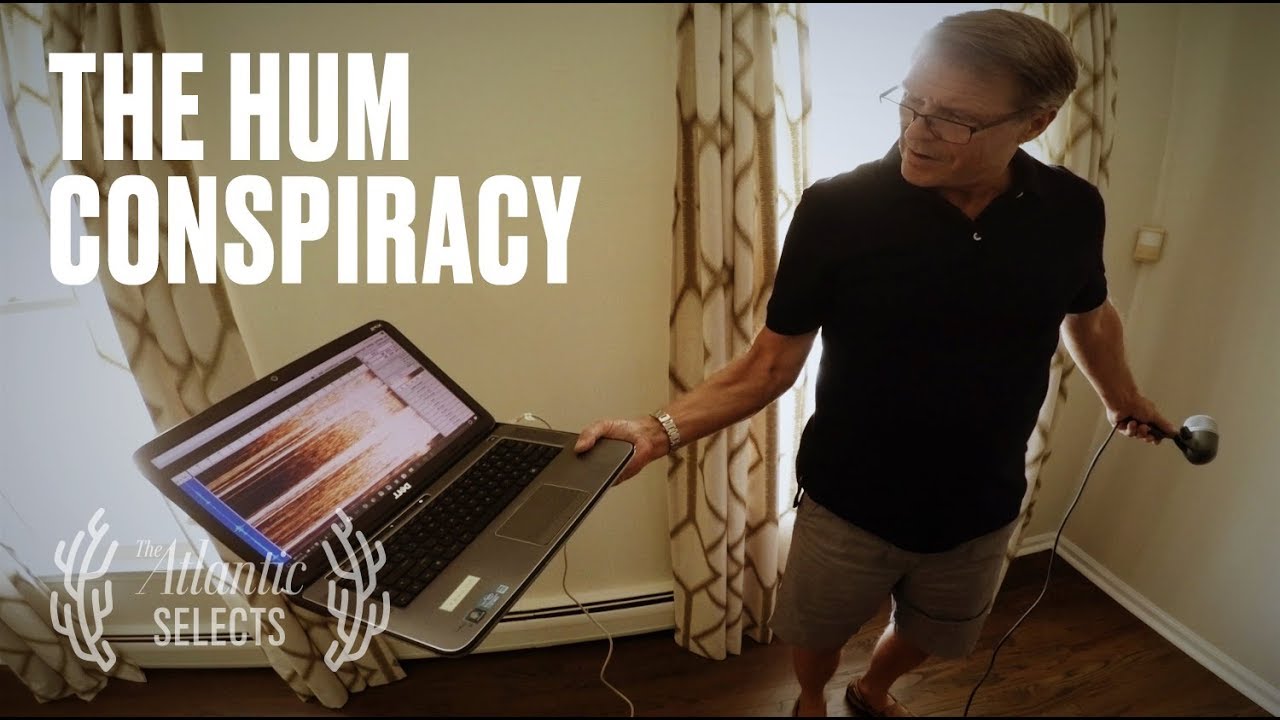 
A man is tormented by a low-frequency humming sound emanating from his house.

Could it be the “hum,” a mysterious noise heard around the world by thousands of people? Or is that just a collective delusion?

Some describe it as sounding like an engine idling just outside the house. Others report hearing a low-frequency rumble. But almost everyone who can hear it — 2 percent of the population, by some estimates — agrees on one thing: “The Tum,” as it has come to be called, is a persistent, maddening noise for which the scientific world has no known explanation.

Since it was first reported in Bristol, England, in 1970, this elusive phenomenon has plagued thousands of people across the globe, slowly eroding their sanity. One of them is Steve Kohlhase, an industrial-facilities mechanical engineer living in Brookfield, Connecticut.

In Garret Harkawik’s short documentary Doom Vibrations, Kohlhase describes the noise: “Your ears are ringing real bad. If it’s a bad day, it feels like your brain is being squeezed. It’s nauseating.” Kohlhase says his dog, too, seems to suffer from the noise; once Kohlhase started hearing it, the canine became lethargic, and has never recovered.

In the film, Kohlhase lays out the extensive evidence he ha collected on the unexplained noise pollution. The quest for answers has consumed him; he estimates that he has spent $30,000 on legal fees and equipment related to his independent investigation. The single through line in all reported cases Kohlhase has studied, he says, is that the locations are along high-pressure gas pipelines, or at least in close proximity to them.

The phenomenon has spawned many conspiracy theories. Sufferers, known as “hummers,” have pointed fingers at sources such as electrical power lines, wireless communication devices, and low-frequency electromagnetic radiation.

For decades, doctors dismissed patients’ complaints as tinnitus, an auditory problem that affects 15 percent of people. But the latest research suggests that the noise is not a hallucination and that many hummers do not suffer from impaired hearing.

Dr. David Baguley, an audiologist at Addenbrooke’s Hospital in Cambridge, estimates that about a third of cases can be attributed to environmental causes, such as industrial machinery at a nearby factory. But the majority of cases remain unexplained. Baguley himself believes that many of his patients suffer from extreme sensitivity to signals outside the normal range of human hearing.

“I think most people view the hum as a fringe belief,” Harkawik told me, “because it’s so subjective—people say they hear something that most people can’t hear. But when you look at the vast number of people who say they hear it, it’s obvious that there’s something going on.”

So, does the filmmaker subscribe to Kohlhase’s gas-pipeline theory? “Some parts are definitely believable; others less so,” Harkawik said. He admits that some of Kohlhase’s wilder extrapolations veer into conspiracy-theory territory. “I don’t think we will ever know for sure though, since it would require an extraordinary amount of coordination and work to prove it.”

But Harkawik was drawn to Kohlhase’s story regardless of the relative plausibility of his claims. “When I make something about a person with unusual beliefs, I no longer go into it thinking, What will it be like if they realize they’re wrong?” he said. “I spend more time on how they arrived at their beliefs and what of myself I see in them.”

In this case, the filmmaker identified with Kohlhase’s obsessive devotion to his project, despite the fact that it had very little broad appeal. “The response to his research was underwhelming to him, but the people he has positively impacted keep him going,” Harkawik said. “I often feel the same way about documentary film—I spend years on a project, inevitably feel underwhelmed by the response, but ultimately keep working because one or two people email me to say it meant something to them. I think most creative people would identify with Steve’s story.”source

Do you think the Hum exists? What is this strange humming sound for you?

Astronomers See a Star’s Final Scream Into a Black Hole Halfway Across The Universe : ScienceAlert
Mars Once Had So Much Water, It Could Have Been An Ocean World, Scientists Say : ScienceAlert
We May Finally Know How Lightning Gets Its Zigzag Shape : ScienceAlert
Cannabis For Pain Relief? Review of 20 Studies Provides Sobering Results : ScienceAlert
Chilling Glimpse Into Our Future if We Survive Another Million Years : ScienceAlert